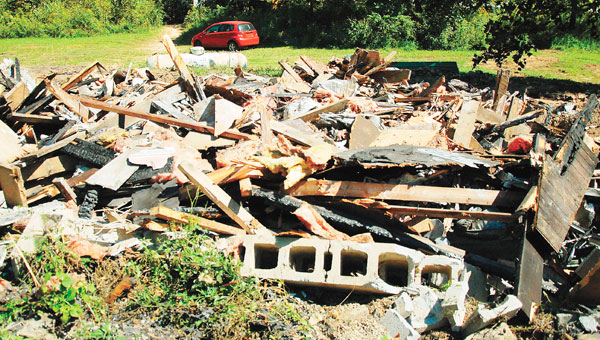 PEDRO — An accidental fire that leveled a house has sparked a controversy over whether the nearest fire department should have responded.

Questions about the Decatur Volunteer Fire Department’s actions have been raised because of allegations of a long-standing feud between the fire chief and the man who lived in the house.

Nine minutes later the Elizabeth Township Volunteer Fire Department was alerted when 911 was told that Decatur was refusing to respond and told the center to dispatch the Elizabeth crew.

However, since the homeowners have not filed a complaint about Decatur’s decision not to respond, there will not be an investigation by the sheriff’s office, according to Sheriff Jeff Lawless.

Attempts to contact Decatur Chief Gene Cox at the fire department, his home and through e-mail were unsuccessful.

“Gene Cox expressed concern about his safety and the safety of his men,” Lawless said he was told on why Decatur did not respond. “Cox and Patton have had an ongoing problem for years.”

Despite many rumors alleging a restraining order, there was not any order preventing Cox from going onto the property, Lawless said.

A few months prior to the fire, the Decatur department assisted the Ohio State Highway Patrol when an 18-wheeler ran off the road. The accident was near Patton’s house and Cox had parked the fire truck in Patton’s driveway.

“Mr. Patton called our office and asked it be removed,” Lawless said. “I sent an officer out at the time who told him the property owner did not want the fire truck on his property. We asked Mr. Cox to remove his vehicle from the property. Speaking with my deputy, at no point was Mr. Cox advised he would face criminal charges in the course of doing his job.”

The state fire marshal has ruled the cause to be undetermined, but it most likely was accidental due to an electrical malfunction near the front door.

“An extension cord and a freezer could not be eliminated,” said Shane Cartmill, public information officer for the state fire marshal. “The Division of State Fire Marshal does not have jurisdiction over the day-to-day operations of a fire department – private or municipal. Any complaints or issues with the fire department received by the Division of State Fire Marshal would be referred to the local government or local law enforcement officer.”

Attempts to locate Patton were unsuccessful.

What color lighting will brighten up the Ironton-Russell Bridge? It’s up to the residents of Ironton. A representative from the... read more