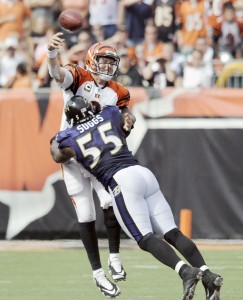 CINCINNATI — Instead of watching a game, Mike Nugent got a chance to win one.

The kicker who spent most of last season watching from home had the best day of his career on Sunday. He made all five of his field goal tries, sending the Cincinnati Bengals to a 15-10 victory over the Baltimore Ravens that extended their domination of the AFC North.

Instead of Terrell Owens and Chad Ochocinco, the star of this one was the kicker.

“Hey Hollywood!” holder Kevin Huber called out to him in the locker room.

Nugent’s perfect day made the difference in a game dominated by the defenses. He was cut by Tampa Bay early last season and learned what it’s like to be out of a job in the NFL.

“It was something to experience firsthand, sitting on Sundays watching people do a job you want to be in,” Nugent said. “You realize there’s a lot of people watching on Sundays who want your job.”

The former Ohio State kicker watched the Bengals (1-1) make the playoffs last season by running the table in their division, going 6-0 for the first time in franchise history. Cincinnati has won its past eight division games, a club record.

“It’s always been this way for the past 10 years I’ve played against them,” receiver Chad Ochocinco said. “It’s never been a blowout. It’s always close. I don’t know why the games are always like that. It’s extremely frustrating from a skill position set, but I think the linemen and the defense enjoy games like this. And the defense really saved us today.”

The Ravens (1-1) couldn’t pull one out despite another brilliant day by their defense, which hasn’t allowed a touchdown in its past 10 quarters including the playoffs. Baltimore was in position for a 10-9 win — the same score it beat the Jets by on Monday night — after Billy Cundiff kicked a 38-yarder with 5:46 to go.

Bernard Scott returned the ensuing kickoff 60 yards to set up Nugent’s go-ahead kick from 38 yards. Linebacker Brandon Johnson then intercepted Joe Flacco’s tipped pass and returned it to the Ravens 11-yard line, giving Nugent a chance for his decisive fifth kick with 2:48 left.

“It’s a tough one for me,” said Flacco, who was 17 of 39 for 154 yards and a passer rating of 23.8. “Turning the ball over four times is tough. You don’t like feeling responsible for why we didn’t win the game. Everything about it’s tough. We didn’t do enough on offense.”

Neither offense did much, leaving it up to the kicker.

Nugent overcame a groin injury during training camp and won a competition with Dave Rayner for the chance to replace Shayne Graham. The first time he was really needed, he was perfect on every kind of kick. He connected from 36 and 30 yards for a 6-0 halftime lead, then from 46, 38 and 25 yards in the second half.

Baltimore’s defense was galled by two calls that contributed to field-goal drives. Ray Lewis got a penalty for tripping after he rolled into Carson Palmer for a sack. Terrell Suggs was called for roughing the passer when he wrapped his arms around Palmer on another sack and drove him backward for the tackle.

“There were six points given off (bad) calls,” Lewis said. “It’s six points. They didn’t earn it. You don’t come into a lion’s den and play nice, man. This is football, and football is getting hit. There’s so many rules that take away from the game.”

The Ravens invested a lot of money into upgrading their passing game, adding Anquan Boldin, the injured Donte’ Stallworth and former Bengal T.J. Houshmandzadeh as receivers. The offense had a tough time against a defense that got embarrassed in its opener and took it out on Baltimore.

“We felt so bad as a defense,” safety Chris Crocker said. “We felt awful.”

New England had its way during a 38-24 win. Defensive coordinator Mike Zimmer blamed himself for overloading the playbook. This one would be on his players, he said.

They held up their end emphatically.

Flacco threw a 31-yard touchdown pass to Derrick Mason in the third quarter, but spent most of the game dodging an unrelenting blitz that threw the passing game out of whack. He was 0 for 4 in the first quarter, the first time he went an entire quarter without a completion since his rookie season in 2008.

NOTES: Owens had three catches for 57 yards and Ochocinco had four catches for 44 yards. … The Ravens are 1-5 in their past six games in Cincinnati. … Houshmandzadeh was booed every time his name was mentioned over the public address system. Flacco threw six passes his way, but none were completed. … Adam “Pacman” Jones had one of the Bengals’ four interceptions, his first since he was with Dallas in 2008. He sat out last season when no team wanted him. He also hurt his left shoulder in the second half and didn’t return.

The Associated Press HOUSTON — After dropping the second of three games to the Houston Astros, the Cincinnati Reds immediately... read more