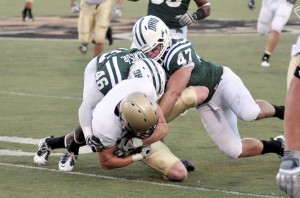 The Ohio Bobcats will need a strong defensive effort against the Marshall offense Saturday night. Linebacker Luke Keller (47), the leader of the defense, and Alphonso Lewis combine to make the stop of a Wofford running back.

HUNTINGTON, W.Va. — Marshall University will host long-time Mid-American Conference Rival Ohio University on Saturday as the two schools renew the regular season rivalry known as “The Battle for the Bell” for the first time since 2004.

Kickoff is set for 7 p.m. at Joan C. Edwards Stadium.

Marshall (0-3) and Ohio (1-2) have faced each other on the gridiron 53 times and the Bobcats hold a 29-18-6 lead in the all-time series. Marshall, however, has won nine of the last 10 meetings, including a 21-17 win over the Bobcats in last December’s Little Caesar’s Pizza Bowl in Detroit.

The two schools have not met with the “Bell” on the line since Marshall left the MAC to join Conference USA in 2005. That contest was a 16-13 MU win in Athens.

The bell was introduced to the series in 1997 when Marshall moved to Division I-A (now FBS) status and joined the Mid-American Conference.

The bell is a river boat bell that is symbolic of the river boat traffic on the Ohio River which serves as the boundary line between West Virginia and Ohio.

The “Battle for the Bell” will also serve as the grand finale for Marshall’s Hall of Fame Weekend. Eight former Marshall greats will be inducted in the MU Hall of Fame during the annual banquet on Friday night and then be honored prior to kickoff at Saturday night’s game.

Marshall’s Marching Thunder will also be hosting more than 400 high school band members from throughout the region that are taking part in “Band Day” activities during Saturday’s contest.

PARKING INFORMATION: University game day parking lots will open to football parking permit holders at Noon on Saturday. The stadium gates will open 90 minutes prior to kickoff at approximately 5:30 p.m.

TICKETS: The Marshall University Ticket Office, located in the Cam Henderson Center lobby, will open at 2 p.m. Saturday and handle ticket sales and will call until 4:30 p.m. After 4:30 p.m. will call and ticket sales will move to the Gate A ticket booth at Joan C. Edwards Stadium. Fans will be able to purchase tickets online at www.Herdzone.com until 2 p.m. on Saturday and pick their tickets up at will call.

The Thundering Herd football team and coaches will depart buses behind Hodges Hall and make their way through campus and across Marshall Memorial Boulevard into the Joan C. Edwards Stadium West Lot on their way to the locker room at that time.

The team will be led by cheerleaders and members of the Marching Thunder as in years past. Fans are encouraged to line up along the route which passes by the first-year residence halls and the Student Recreation Center into the north west gate of the Stadium West Lot and continues toward the Shewey Athletic Center.

Johnson adjusting to spot as DB in Buckeyes’ secondary

The Associated Press COLUMBUS — It doesn’t take a lot of reshuffling of the past to picture Orhian Johnson running... read more