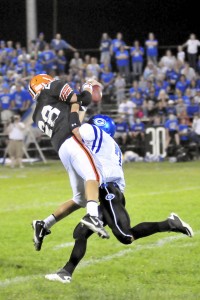 Ironton’s Michael Lawless (26) goes above Gallipolis defensive back Austin Wilson (7) to make a catch for a first down.

Instead, the Ironton Fighting Tigers showed them how to play a game of keep away.

In a battle of unbeatens before a standing room only crowd, Ironton had the ball for nearly 18 minutes of the first half and limited the Blue Devils to only 18 plays in the half — five in the first quarter — en route to a dominating 48-7 win Friday.

“They didn’t run too many plays the first half,” said Ironton coach Bob Lutz. “We were just better than them up front.”

In a performance that would have impressed even Al Bundy, Ironton fullback Brian Warner ran 22 times for 148 yards and scored five first half touchdowns.

His first four scores were 1-yard runs and he finished the half off with a 32-yard scamper.

Tres Wilks added 96 yards on 10 carries and quarterback Tommy Waginger ran four times for 58 yards and completed all three of his passes for 88 yards. Michael Lawless had two catches for 53 yards and Pierce Reeves one for 35.

“(Waginger) threw the ball well. They were right on the money,” said Lutz. “You’ve got to be able to do that (play action pass) when they’re crowding you at the line of scrimmage.”

Ironton (5-0) began the game playing its selfish brand of football by driving 79 yards in 11 plays with Warner going the final yard. Jonathan Williams kicked the conversion and it ws 7-0 at the 6:42 mark.

Gallipolis (4-1) went three-and-out and Ironton went on a 92-yard, 10-play march keyed by a 39-yard pass from Waginger to Lawless.

“We need to use it when teams start stuffing the line of scrimmage,” said Waginger.

Warner scored with 52 seconds left in the quarter and Williams pushed the lead to 14-0.

Gallipolis started to put a drive together only to have Lawless intercept an Ethan Moore pass with 10:10 left in the half.

The Fighting Tigers went 48 yards in seven plays and Warner’s third short TD run made it 21-0.

Two plays later Ironton’s Nick Culbertson recovered a fumble at the 45. Keyed by a 35-yard pass from Waginger to Reeves, Ironton scored six plays later on Warner’s fourth 1-yard run and it was 27-0.

Gallipolis fumbled the kickoff and Laron Beach recovered at the Blue Devils 32. Warner bolted for the score on the first play and Waginger threw to Wilks for the conversion and a 35-0 lead.

The Blue Devils had their only scoring drive at the start of the second half. A 53-yard catch-and-run pass play by Austin Wilson got the ball to the Ironton 7, but Gallipolis couldn’t move the ball on two running plays.

A motion penalty back the ball up 5 yards and a third down pass was nearly picked off. On fourth down, Moore than scrambled to his right and heaved the ball into the end zone where Dalton Jarrell was able to make the catch for the score.

But Ironton came right back with a 72-yard, 7-play drive and Waginger did the honors with a 39-yard keeper for the touchdown and it was 42-7.

The final Ironton touchdown came on a 20-yard run by Robert Bishop with 30 seconds left.

Defensively, Ironton limited the Blue Devils to 187 total yards with speedy halfback Austin Wilson held in check with 45 yards rushing on 11 carries. He had two receptions for 68 yards.

“We had to stop Wilson. He had speed. We knew if we hit him, we could slow him down,” said Lawless.

The Fighting Tigers will face a tough challenge next Friday when they host Jonathan Alder at 8 p.m. Alder — the Div. II state baseball champions last spring — qualified for the playoffs last season but lost in the first round to eventual state champion Kettering Alter.

Coal Grove Hornets’ running back Boo Woods (2) follows the blocking of Greg Bender (22) as he gains some of... read more