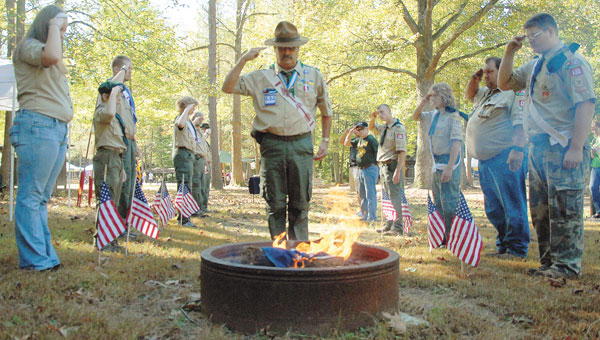 Dave Lucas and Boy Scout Troop 106, out of Ironton, demonstrate a flag retirement ceremony Saturday at Camp Oyo during an anniversary celebration and open house. THE TRIBUNE/JESSICA ST. JAMES

Several area Boy Scouts took part in a celebration of the 100th anniversary of scouting at Camp Oyo in Portsmouth this weekend. Scout troops from the Tecumseh district of the Simon Kenton Council demonstrated their skills during an open house Saturday. The district includes Lawrence, Scioto, Greenup and Adam counties.

Scouts from Troop 106 of Ironton demonstrated a flag retirement ceremony.

Scoutmaster Dave Lucas explained the ceremonies have become a sort of niche for the troop, which has done several of them.

“We discovered that most people don’t know how to retire a flag,” Lucas said. “It’s a lost art.”

Most often the troop burns the flags, though burying is also an accepted way of retiring them. They start with by folding the flag in a triangle. Then the red, white and blue sections of the flag are separated and burned individually during the ceremony.

Lucas said the scouts have a responsibility in the community to carry on knowledge of the proper way of displaying and retiring the American flag.

“If you think about it, who else is going to guard the knowledge about flags and flag decorum?” Lucas said.

Senior patrol leader Caleb Franz first participated in a flag retirement two years ago at a summer camp. He said he finds the ceremonies emotional.

“I find a sense of patriotism in this,” he said. “I really enjoy retiring flags.”

Troop 103 of Deering demonstrated both rope making and two of the basic knots.

“There’s not too many of these machines around,” Scoutmaster Marion Harrison said the machinery that twisted the material into rope.

“They’ve been pretty steady,” he said. “We let the kids help make the rope and then we give them the rope.”

Several other activities including live music, a tomahawk throwing demonstration, a demonstration by a Native American dance team and an archery range and a BB gun range were also a part of Saturday’s celebration.

SOUTH POINT — Lucasville Valley came into the game averaging nearly 44 points per game, and the Indians used a... read more