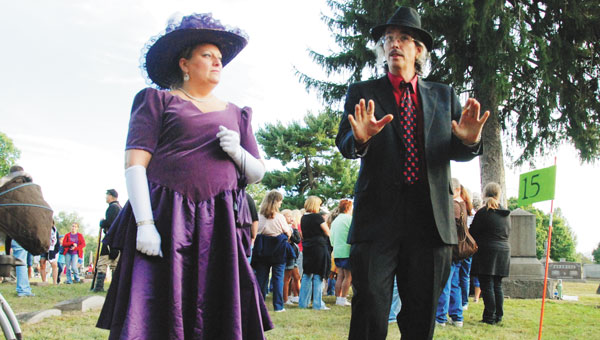 Richard Lambert had only trained for three weeks before he went into a battle where he would lose his life. A Union soldier and the first casualty from Lawrence County in the Civil War, Lambert died in a battle at Scary Creek, W.Va. (then Virginia).

“My father borrowed a wagon, located my remains and brought me all the way back to Ironton where I have laid ever since,” Lambert, brought to life by Joe Unger, explained to a crowd gathered at his graveside Saturday night.

Nearby Lambert rests Ironton founder John Campbell and his wife Elizabeth. Their daughter, Clara portrayed by Ann Boggess, sued Charles Arbuckle and won after he proposed marriage to her but ultimately married another woman.

It was Lambert, the Campbells’ and many others’ stories that were told during the Historical Ghost Walk at Woodland Cemetery. Approximately one thousand people were expected for a self-guided tour of the graveyard that holds some of Lawrence County’s most prominent historical figures. Each year the event, which is sponsored by the Lawrence County Historical Society, features about 30 stories of those who are buried there.

Eventgoers also got to hear the story of Osa Wilson, who at 34, died at the hand of her husband, a prominent businessman in Ironton. A statue of Wilson near the gravesite bears a permanent mark that resembles a handprint.

“Anything you can do to concrete they’ve done and it won’t go away,” actress Bambi Davidson, who portrayed Wilson, explained to the crowd.