Couple sees business as tribute to past 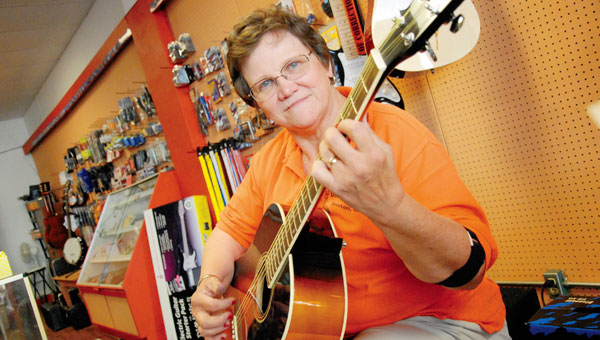 That was the year Chubby Checker topped the charts with “The Twist.”

Some people may still remember buying their copy at Dick’s Record Shop on South Third Street.

Dick’s Record Shop, now Dick’s Music Shop, has been a fixture in Ironton for nearly 50 years. When founder Dick Rice became ill, one Ironton couple wanted to save the store for future generations to enjoy.

“It’s a name that everybody knows. We wanted to keep the tradition alive.”

Following her lifelong dream to own a music store, Rowena and her husband, Paul, embarked on a new journey, and bought the store from Dick.

Due to health reasons, Rowena said that Dick was not able to operate the shop on a regular basis, and the store remained closed for a couple of years.

Rowena and Paul began restocking the store with instruments, music and all the accessories that belong in a music store. Guitar picks, strings, reeds, mouthpieces, mutes.

“We have a little bit of everything, and what we don’t have we can get,” said Rowena.

The shop still has a vintage feel to it. Guitars and banjos hang from the walls. Clarinets, trumpets and trombones are among the wind instruments on display. Drum kits are set up, sheet music is everywhere and there is no shortage of friendly customer service.

“She’s the musician,” Paul said of his wife. “I’m not. But I excel at customer service. I love the customer side, it’s really fun.”

Paul also said he is confident that people will continue to patronize the music shop because of its history, service and local business appeal.

“I really get a lot of satisfaction out of. We’re so small, we’re so little here, that, knowing if you really treat people well and try to give them a good deal and good service, they like that and they’ll chose us over the big ones,” he said.

Rowena, the resident musician, majored in music at the Capital University Conservatory of Music in Columbus.

“Music’s always been my passion,” she said. “Life led me down a different path.”

Her day job as a teacher at the Federal Correction Institution in Summit, Ky. is almost at its end.

“I retire in 18 months. It just seemed like the right thing to do,” Rowena said about buying the shop. “I’m too young to just stop. I’m still interested in music, and spreading music and getting people involved in music. This just seemed like a great way to do it.”

She plays many instruments including trombone, trumpet and most brass instruments, drums, piano and guitar. She also stays active in music as the women’s choir director at St. Joseph Catholic Church.

Paul, who said he is not a musician at all, has learned a lot from working with his wife in the shop and helping customers.

“I’ve really gained a lot of knowledge,” he said. “I’ve learned things like what reeds should a beginner use, or mouthpiece or whatever.”

The shop not only sells virtually all instruments, but also has instrument rentals for band students. They also have each school’s required music books for each instrument.

“We try to target 28 schools,” Paul said. That would include our entire Tri-State. And that’s been every rewarding.”

Rowena and Paul also encourage their customers, even the children, to try out the instruments.

“We want the kids who come in the store to be able to experience the instruments,” Paul said. “For better or for worse, our policy is not to not take down the instruments. Play the guitars a little. Sit down with them. Hold them. Play the drums. We keep a set that they can actually play and not damage.”

“In the schools, the arts have been trampled on. In our day, music was a requirement. Now you’re lucky to be able to get it,” she said. “The studies show that learning to play music and playing music helps with maintaining your mental stability as you get older. So why in the world wouldn’t you want to promote that at an early age. That’s something that you carry with you your whole life.”

The Molletts will celebrate their one-year anniversary of owning Dick’s Music Shop as well as their 35th wedding anniversary in November. After all those years, Paul said he is glad to see Rowena’s dream of owning a music shop become a reality.

“It’s been her dream to have a music store,” he said. “It’s really her dream and if I get to be a part of that, it means a lot to her. This could be a candle shop, you know? But because it’s what she wants then I try to be supportive of that. And do you know what? It turned out to be a blast.”

Paying tribute to a local hero