Herd holds off Ohio as Holliday gets 1st win 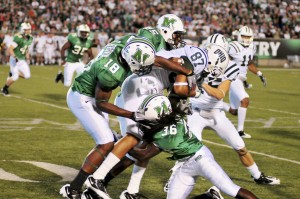 HUNTINGTON, W.Va. — The Marshall University football team defeated the Ohio Bobcats for the ninth time in 10 games, 24-17, in the Battle of the Bell on Saturday evening at Joan C. Edwards Stadium.

Senior quarterback Brian Anderson finished the night 21-of-30 for 295 yards and three scores as Marshall now stands at 1-3 on the season.

Wide receiver Antavious Wilson finished with 119 yards on seven catches, two for scores, as the Thundering Herd knocked off Ohio for the sixth-straight time.

Neither the Thundering Herd nor the Bobcats could cash in on their first possessions of the contest.

After Ohio pinned Marshall down at its own 8-yard line on a punt from Hershey, Anderson led the offense down the field for a quick strike taking just 1:38 off the clock.

The Louisville, Ky., product was a perfect 3-for-3 on pass attempts as MU totaled 90 of the 92 yards through the air, capped off by a 45-yard hook up from Anderson to Wilson with 7:04 left in the first quarter.

Ohio notched its first points of the game when kicker Matt Weller drained a 48-yard field goal with 3:48 remaining in the first half.

Marshall used another quick scoring possession towards the end of the second quarter. Andre Booker caught a 34-yard pass, prior to corralling a 7-yard screen toss from Anderson for his first career touchdown catch with just over a minute to play in the half. The Tyler Warner extra-point attempt was blocked and the Herd led 13-3 lead at intermission.

On the opening drive of the third quarter, quarterback Phil Bates faked the speed option run to the near sideline and connected with McCrae for 46 yards. Two plays later, Boo Jackson entered the game under center and fired a 2-yard strike to McCrae, cutting the Herd lead to 13-10 with 11:51 left in the quarter.

With 2:04 remaining in the third, the Herd tacked on three more points, when Tyler Warner split the uprights from 23 yards out.

On the ensuing Ohio drive, it appeared that Marshall would hold the Bobcats to a 23-yard field goal attempt of their own. Hershey took the snap on a fake-field goal try and scrambled 6 yards beating the Herd defense to the pylon to take a one-point lead, 17-16, with four ticks left in the third.

After relinquishing the lead for the first time on the evening, Marshall turned around and mounted a 14-play 70-yard drive, taking 6:43 off the play clock with Wilson ending the drive on a 12-yard touchdown reception.

On the drive, Marshall converted all three third down conversations. Chuck Walker snagged a two-point conversion pass from Anderson for a seven-point cushion with 8:21 left in the game.

Trailing by seven, the Bobcats drove down to the Marshall 36-yard line. With eight seconds left Boo Jackson flung a Hail Mary pass that McCrae pulled in amongst a crowd of defenders, bringing the score to 24-23.

The Bobcats elected to go for the win by attempting a two-point conversion with no time remaining, but Jackson’s pass sailed through the back of the end zone as the receiver fell down.

The Herd travels to Southern Miss at 8 p.m. Saturday in their C-USA opener.