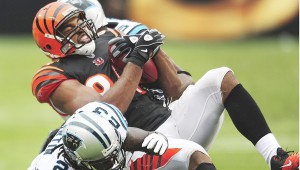 CINCINNATI — Somehow, the Bengals offense keeps getting uglier. And there’s no clear-cut reason why.

The Bengals struggled to take advantage of Carolina’s many mistakes during a 20-7 win Sunday that improved their record to 2-1 but did little to calm concerns about a veteran-laden offense that can’t find its way much of the time.

“Not too many teams have to make excuses for winning like that, but I guess we do,” an annoyed coach Marvin Lewis said Monday. “So we’ll just move forward and I’ll say little, our players will say less, and that’s the way it will be.”

The statistics pretty much say it all.

Carson Palmer threw two first-half interceptions and could have had several more picked off. His passer rating is 71.3, which ranks 22nd in the league and is below his 83.6 rating for all last season.

So far, they haven’t gotten much bang for the more than 10 million bucks.

Reality-show hosts Chad Ochocinco and Owens aren’t making much of an impact — they combined for only 76 yards. The T-Ocho combo has 389 yards and one touchdown. By comparison, Pittsburgh’s Mike Wallace and Hines Ward have combined for 338 yards and three touchdowns even though the Steelers haven’t had their top two quarterbacks.

“I think it’s really close,” offensive lineman Andrew Whitworth said. “We have the weapons, which is a good thing, and we also have a quarterback that gets the ball where it needs to be.”

Palmer is becoming the focus of fans’ discontent, given the high expectations that accompanied Owens’ arrival. Playing in the rain in Carolina, Palmer was repeatedly off-target. The Bengals held the ball for more than 21 minutes in the first half but scored only 10 points because of the turnovers. They had a 16-play drive that went only 56 yards and ended with a punt.

“It wasn’t one of his better games,” offensive coordinator Bob Bratkowski said of Palmer. “But I don’t think that’s of great concern. Obviously, I think he’ll bounce back and play better this week. But like any quarterback, he needs help from the other guys.”

Lewis repeatedly defended Palmer on Monday, suggesting that his supporting cast is more to blame for not following the script.

“I think he does a good job of directing us,” Lewis said. “He’s been a good leader.

“It goes back to we’ve got to go from the meeting room to the practice field to out there on the game tape and see the same things and not leave our quarterback out there wondering, ’What’s going on now?”’

Lewis also absolved his quarterback of blame for the clock management at the end of the first half that prevented them from getting a field goal attempt.

The Bengals had the ball at the Carolina 10-yard line with 15 seconds left and no timeouts. Palmer completed a pass to Gresham at the 5, where he was tackled. The Bengals couldn’t line up in time to spike the ball — right tackle Dennis Roland appeared to be shaken up and slow to line up.

“I was greedy, and I shouldn’t be greedy,” Lewis said. “So a couple different things I’d do differently in those situations and direct the quarterback a little differently.

“But I wanted to kind of have an opportunity to break the game open and get the touchdown, and we didn’t. We didn’t get anything. But it’s good. We didn’t have it bite us in the tail yesterday. We lived through it. And it’s a good learning experience for us.”