‘Once in a lifetime’ job 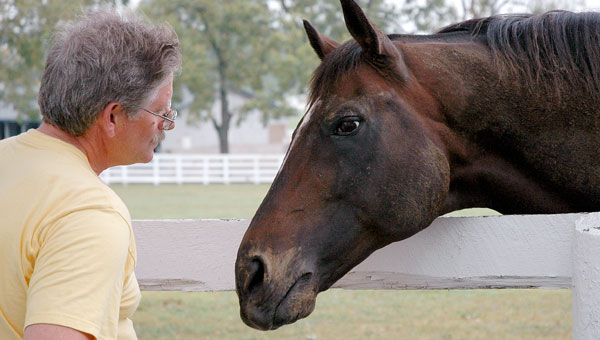 Proctorville-based photographer Steve Faust is shown with Cigar, the Hall of Fame Thoroughbred racehorse who became the first American racehorse to win 16 races in a row since Calumet farm-bred and Triple Crown winner Citation did in 1948 and 1950. Faust is on assignment covering the World Equestrian Games at the Lexington, Ky., Horse Park. Photograph courtesy of Steve Faust

LEXINGTON, Ky. — He’s only half way through the assignment, but a Proctorville-based freelance photographer has already focused his Nikon lens on Muhammad Ali, Lyle Lovett and Star Trek’s most famous commander.

Not to mention some of the most glorious looking and technically skilled horseflesh athletes in the equestrian world. It’s all part of being a credentialed photographer for the Alltech FEI World Equestrian Games, going on through Oct. 10 at the Kentucky Horse Park in Lexington, Ky., and Steve Faust is in the midst of it all.

Since Saturday, Faust has shot 50,000 photos from the opening ceremony to a press conference with Lovett, whose concert will close the event, to the reining competition where Team USA brought in the gold.

“That was very impressive,” Faust said in a phone interview Wednesday from the horse park during a 10-minute lunch break. “And at the opening exercises, William Shatner drove a carriage around. I was within three feet of his driving by. It was like “Hi, Captain Kirk.’”

The world games that are expected to attract a half-million to the Central Kentucky prompted the state to spend $75 million to overhaul the horse park adding a 6,000-seat indoor arena and a 7,500-seat outdoor arena, plus a temporary stadium that holds 22,500.

Throughout the 16-day games will be events in dressage, driving, endurance, eventing, jumping, para-dressage, reining and vaulting.

It’s a long working day for Faust who starts at 7 a.m. and wraps up shooting by 8 p.m. Then it’s editing shots and hopefully he gets in bed by 1 a.m. Then it starts all over again. One perk of the assignment is the shuttle bus provided for the photographers.

“They are shuttling us where we need to be. They are just making sure you are going to be in the right place,” he said. “There is something going on on every acre of this park. Tomorrow is the opening event for dressage and it is going to be really hectic. These other big corporation photographers, they have two or three people.”

That means a freelancer had to pick his venues.

Right now, the biggest challenges facing Faust are keeping up with the pace and the sometimes not conducive environment.

“Those horses are moving so fast and the lighting is not so good in the indoor arena,” he said.

Faust, whose day job is as a route driver for Snyder’s of Berlin, picked up a camera as a teen, but it was not any more than a hobby.

Then Faust discovered the Lexington horse park and starting shooting everything he saw.

That led to the horse park offering him assignments, including his becoming an official photographer for the annual Rolex Cup Three-Day Event each April.

But in the few short years Faust has turned photography into a career one of his prized accomplishments has been his becoming a credentialed photographer for the world games.

“It’s brutal and hard,” Faust said about the pace. “But this is a once in a lifetime experience.”

It’s recycling with an added punch. That’s the mission of the month-long recycling drive sponsored by the Lawrence Soil and... read more