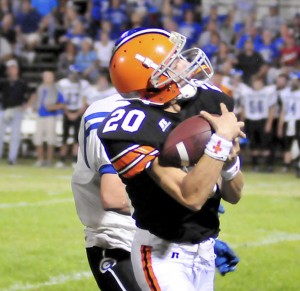 The Ironton Fighting Tigers’ defense seems to have turned the corner. Now, if they can keep the Alder Pioneers from doing the same.

Ironton’s defense will be put to the test by the perimeter games of the Jonathan Alder Pioneers when the teams meet at 8 p.m. Friday at Tanks Memorial Stadium.

Leading the way for Alder is 6-foot-1, 180-pound senior quarterback Graham Johnston and 5-10,175-pound senior tailback Austin Dehart who use their speed to put pressure on the opposing defenses.

“The quarterback is a good athlete. Not only can he run and throw, he’s a strong runner as well,” said Ironton coach Bob Lutz. “Dehart runs hard and he has good speed, too. Their speed at the skilled positions is as good as we’ve seen.”

Next came a 28-27 loss to state ranked Clinton-Massie when the Pioneers missed the potential game-tying extra point kick. Johnston was 12-of-21 passing for 199 yards and two TDs, Derritt Potts returned a kickoff 91 yards for a score, and Josh Holland returned a fumble for a touchdown.

In a 56-0 rout of Miami Trace, Johnston ran for one score and threw for two while Dehart had 107 yards and a TD.

“One of the big things we have to do is play well up front. They’ve got some size and they’re pretty balanced running and throwing the ball,” said Lutz. “They’ve got a good program. They’re used to playing in big games.”

The Pioneers (4-1) do have some size, especially at the guards.

But the defense is just as talented for Alder, the 2006 Div. IV state runners-up who have made nine straight playoff appearances.

“They’re not as big on defense, but they’re quick and aggressive. They’ve got a good group of linebackers who can run to the ball,” said Lutz.