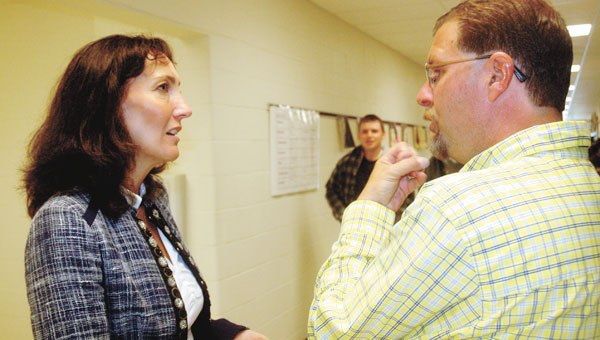 Anna Harleman De Geer reminisces with South Point High School teacher Kent Stewart about her year as an exchange student at the high school during a visit this week to South Point. THE TRIBUNE/BENITA HEATH

SOUTH POINT — It was the year McDonald’s introduced the McNugget. Bjorn Borg put up his racket after five straight Wimbledon’s titles and “Flashdance” was battling it out with “Return of the Jedi” at the box office.

And for a rail-thin 17-year-old with thick coal black hair and cheek bones chiseled like Cher, 1983 was the year Anna Harleman was introduced to southern Ohio. It was the year she left her home in Stockholm to spend the next 12 months as an exchange student at South Point High School.

“I liked it here from Day One,” she recalled. “It was very beautiful. In Europe you have this picture of the United States as big cities and skyscrapers.”

Flash forward almost three decades and Harleman, now known by her married name of De Geer, is the deputy general of the Swedish-based World Childhood Foundation, an international organization that focuses on reaching out to children at risk.

“The mission is to ensure that children have a right to their childhood,” she said.

The WCF, founded by Queen Silvia of Sweden, intervenes in problem issues such as the sexually abused child, the homeless child, the institutionalized child and teen mothers.

“These are problems everywhere,” she said. “We try to work with prevention. We want to identify groups where children are at risk and we try to prevent (such situations) to break the evil cycle. … We can only do that by helping families as a whole, strengthening families. … We try to assess the situation where we can step in and assist an organization. We like to find new models and methodology that can be replicated.”

Partly as a fact-finding mission to see if there were local projects the WCF might fund and partly as a chance to renew old friendships, De Geer came to Lawrence County this past week, the first time since she left South Point High as a member of the senior class.

The first Pointer friend she saw when she got off the plane in Charleston, W.Va., on Tuesday was Kent Stewart, now a social studies teacher at the high school. Stewart was one of De Geer’s closest buddies during that year back in the 1980s. And it was Stewart’s tracking her down via the Internet that sparked the trip back to Lawrence County.

“It was fantastic,” De Geer said about hearing from Stewart. “It brought back so many memories.”

The WCF had been reviewing the possibility of extending its support to Appalachian organizations “to see if there is anything to do, a project we could support,” she said. “When Kent contacted me, it was like fate.”

So De Geer combined her work with a trip down memory lane, while giving her input to the current teen population at South Point about the value of education and adopting a global viewpoint.

“To get them to look beyond their natural borders to understand they can be so much more,” she said. “People think it is so different in other countries. The outside may be, but in the end it is the same.”

In Sweden the educational system requires nine years of mandatory schooling for children starting at the age of 6 or 7. That is followed by attending what is called the gymnasium where students specialize in a field for between two and four years. Then they may go onto a university.

De Geer, who received no academic credit while at South Point, used her time here as a gap year, or a break in her studies. She then went back to Sweden to finish up a classical and language program.

But during that year De Geer threw herself into the life of an American teen playing on the volleyball team and running track, all of which came back to her in black and white as Stewart showed off picture after picture in a well-thumbed yearbook.

There was her senior cut, a group shot of the volleyball team and a snap from a Halloween party with Stewart dressed to the nines as Boy George. But while teens no longer dance to the theme of “Flashdance” and the way Valley Girls talk is passé, De Geer sees common bonds between teens today and those in the 1980s.

“Kids are acting the same and have the same outlook,” she said. “They have other gadgets, but it is the same.”

Reds use HRs to tune up for postseason playoffs