OUS trip offers look at the past 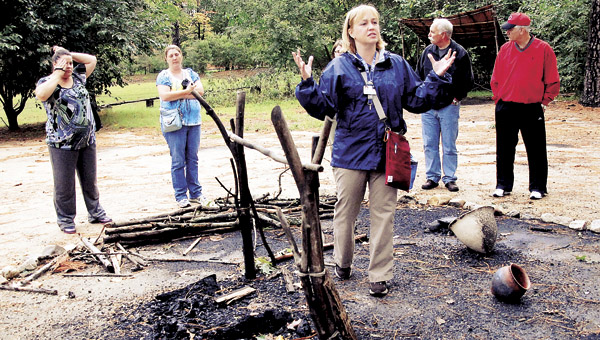 Tour guide Laurin Wittig discusses the Cook Circle, as referred to by the English, as she gives a tour of the Jamestown Settlement to students from Ohio University Southern. Wittig discussed artifacts that Indian women would have used to perform their duties, describing how they differ from the tools used in today’s world.

A group of 42 travelers embarked on an adventure of historical proportions on Friday.

The travelers were apart of Ohio University Southern’s Education on Location program that invited students as well as people from the community to see history first-hand.

This year’s three-day trip to Colonial Virginia began with a visit to Jamestown Settlement and Yorktown Victory Center.

“You get to see things you don’t get to see in a history book,” said Bob Leith, OUS history professor.

Leith has taught for 44 years and said he has taken many trips to historical sites with his students.

“We’ve been going on these trips a long, long time,” he said. “I want them to see their country and see new things.”

The Jamestown Settlement and Yorktown Victory Center gave the travelers guided tours through the history of Colonial America.

The tour of Jamestown was a reproduction of the original settlement, which was founded on a small island on the James River. The original island is still an ongoing archeological site, which can be seen from the tour area.

Jamestown was the first permanent English settlement. In 1607, 144 English settlers arrived from London on three vessels, the Susan Constant, Discovery and Godspeed. Their voyage took four-and-a-half-months.

The OUS travelers were able to experience what living on the ships might be like. Everyone was brought aboard the surprisingly small ships that are harbored at the settlement. The group was ushered into the tween deck, a cargo hold that held supplies as well as passengers. While on the nearly five-month voyage, the English ate only dried foods such as oatmeal, dried peas or dried bread called ship biscuits.

Even though the ships were much smaller than today’s merchant ships, only one life was lost on the voyage.

“Being able to see how all those people came across the ocean in such small ships, cooped up for almost five months, it’s extraordinary that not more people perished in the trip,” said 38-year-old Danny Millhouse.

Millhouse, a nursing major, took the trip for class credit.

According to the tour guide, Laurin Wittig, there were three groups of people that made the Jamestown settlement successful: the English, African indentured servants and the Powhatan Indians.

The tour of Jamestown included a tour of a Powhatan village and the OU travelers were able to speak with some Powhatan Indians and see how they lived. When the English arrived in Jamestown in 1607, there were approximately 15,000 Powhatan Indians living along the waterways around the settlement. By 1674, the English has either converted them to Protestantism or driven them away and settled on their lands.

John Diere, an Indian interpreter at the settlement, was making tools out of various bones. A Powhatan Indian could make 16 fishhooks from one deer’s hooves. The Indian would also make arrowhead from a deer’s ribs.

“Through support of Native Americans they were able to survive,” said Debbie Marinski, assistant professor of history at OUS. “That in itself is amazing.”

At the Jamestown fort, the group observed a musket demonstration by interpreter Don Hulick. He demonstrated on what he called a matchlock musket that was typical of that time period. He said an effective marksman could hit eight out of 10 man-sized targets from 100 yards away. He could also do this three times per minute.

“All of it is just tremendously interesting,” said Elizabeth Green.

Green, a non-traditional student at OU, is spending her golden years earning the degree that she didn’t have time for when she was raising a family.

“I’m finishing things up that I started a long time ago,” she said.

The college senior took the trip for class credit and to help earn her history degree.

“It makes it real,” she said of the tour. “It brings home all the things you read about.”

After the Jamestown Settlement adventure, the OU travelers visited Yorktown Victory Center, where one of the most important sieges of the American Revolution took place.

The American Revolution was the political upheaval during the last half of the 18th century in which the 13 colonies joined together to break free from the British Empire.

On a guided tour through Yorktown Victory Center, the group saw how members of the patriot army lived during the revolution.

Shelter in the Continental Army camp consisted of small tents that would house six to eight soldiers. Health care consisted of a single man, called a surgeon, who treated wounds with vinegar, fever and headaches with tree bark and flux with castor oil.

The indoor galleries displayed the Declaration of Independence and those who had a great influence on it, including John Locke, George Mason and Thomas Paine.

There is also a rare copy of an original broadside printing of the Declaration of Independence from 1776.

Nearing the end of the war, on Oct. 19, 1781, British General Charles Cornwallis surrendered to George Washington at Yorktown.

“Without Yorktown we wouldn’t be independent,” said Debbie Marinski.

As many times as Bob Leith has been to Colonial Virginia, he said he still learns something new each time.

“You always learn something new everyday if you pay attention,” he said.

The living history tours of Jamestown and Yorktown were only the first stops for the OU travelers.

The next two days are planned to be full of historical adventures. …

Feeding the shelves to feed the people

Imagine the cabinet shelves empty, the refrigerator bare and the freezer vacant. Stomachs growling, bodies weak. That would be the... read more