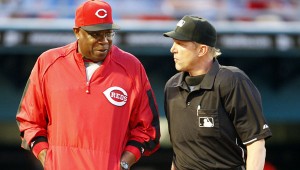 CINCINNATI — Closer Francisco Cordero has to pass when asked what it’s like for the Cincinnati Reds to be in the playoffs.

In his long career, he’s never made it there. Same goes for most of his teammates.

These Reds are really green when it comes to the postseason. Bronson Arroyo is the only member of the playoff rotation who has pitched in the postseason. Catcher Ramon Hernandez, third baseman Scott Rolen and shortstop Orlando Cabrera are the only starting position players to get there.

The Reds open the playoffs Wednesday in Philadelphia, facing the two-time defending league champions who know all about the ultimate pressure. They won the World Series in 2008, got there again last year and lost to the Yankees in six games.

Cincinnati? Hasn’t made it past the regular season since 1995.

October is more than just an unfamiliar month for the NL Central champions. It’s a concern.

“Anything can happen with the nerves,” said outfielder Jim Edmonds, who has playoff experience but might be too hurt to play. “I think the biggest thing for us is it’s the first time a lot of these guys have been involved and we’re going to have to calm them down and play baseball the way we know how to play it.

The few who have been through it have some advice for the first-timers: Don’t get caught up in the moment.

“It’s going to be interesting the first game because they’re going to see the atmosphere, see the pressure, the intensity, and then they’re going to relax and play baseball,” said Cabrera, who won the 2004 World Series with the Red Sox. “I think we took that approach a long time ago, at the beginning of the season. It’s a good thing for us. We don’t need to turn any switch on because I think we’ve been playing really well.”

The rest of the roster will have to take his word on that.

“I’ve never been in the postseason,” said the 35-year-old Cordero. “I’ve watched on TV, but it’s not the same. There’s a lot of young people and (veterans) like myself who have never been to the playoffs.”

The Reds don’t have to set their playoff roster until Wednesday morning. They’re waiting to see how Edmonds’ right Achilles’ tendon feels. The 40-year-old outfielder injured it while rounding the bases on a homer on Sept. 21 and hasn’t played since.

The rest of them are trying to find comparisons to what they’ll experience. Right-hander Edinson Volquez will start the first game thinking it’s not much different than one of his winter baseball appearances in the Dominican Republic.

“I’m trying to be positive, like it’s a regular game for me,” Volquez said Monday. “I’ve been playing in the Dominican where it’s crazy. It’s going to be loud and (fans) will make a lot of noise, but I’ll be ready for that.”

Edmonds found that it’s not the noise, but the heightened intensity that starts with the first pitch and never lags.

“Being focused is the key,” said Edmonds, who keeps to himself before playoff games. “It’s not being too excited and too hyper. You have to be focused and do your job each pitch. Every pitch is super-important.”

The Reds have a little history they can call upon as a reminder.

The 1990 Reds were full of newcomers and playoff first-timers when they reached the World Series against heavily favored Oakland. They swept the A’s in one of the most shocking World Series outcomes.

The Associated Press CINCINNATI — Dusty Baker brought in a tailor during his first spring training as the Reds manager,... read more