Candidates tout reasons why they should get job 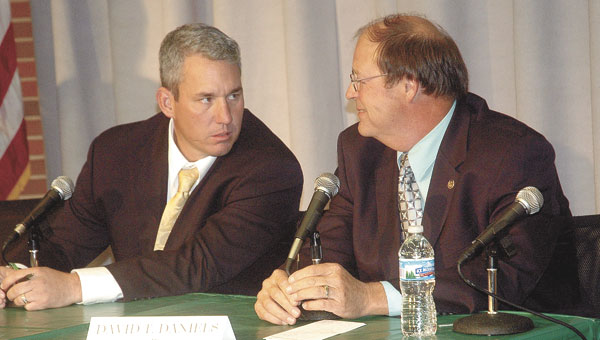 This year’s Lawrence County Chamber of Commerce Candidates Forum opened with the hot button topic that has come close to dividing a nation: health care reform.

Candidates answered questions Tuesday night from a panel of journalists, Randy Yohe of WSAZ-TV, Michael Caldwell of The Tribune and David Malloy of the Herald-Dispatch, and from the audience.

In his opening statement of Republican Bill Johnson, whose is attempting to unseat Democrat Charlie Wilson for the Ohio Congressional Sixth District, went on the attack.

“My opponent has characterized himself as a fiscal conservative,” Johnson said. “But every time that Nancy Pelosi has asked for his vote for her liberal, job-killing policy, he has.”

It’s this race that has gotten on the national radar as a possible upset of incumbent Wilson because of the Democrat’s support of health care reform, the bailout and the Congressional adjournment before deciding on the Bush tax cut extensions.

Wilson countered with a strong defense on his record, including health care.

“Something had to be done,” he said about the reform legislation. “It is a key consumer protection. What we have is not perfect, but it is the first start.”

Wilson and Johnson were joined at the forum, held at Ohio University Southern’s Ironton Campus, by Martin Elsass, the Libertarian party candidate, and Constitutional candidate Richard Cadle. Only Wilson supported health care, with the other three saying they wanted it repealed.

Throughout the evening candidates for each race addressed many of the same issues: taxes, jobs, aid to small business, budget reform and prescription drug abuse.

Both Fallon and Daniels stated that changing the economic climate of their district was a top priority. Fallon said his focus would be to find answers from within the local community.

“How they can help us grow,” he said.

In the May Republican primary Daniels defeated long-time local representative Clyde Evans, who term limited for the House seat had sought a win in the Senate race.

“We would look at services, what is working and we need to get back to working for families,” Fallon said.

The commissioner also stressed the need to reduce duplication of state-funded services.

“A lot of services, boards and commissions are no longer needed,” Daniels agreed addingz. “And I would reach out to the administration to provide some leadership.”

“It is critical if you are going into the legislature that you can work with people and approach people in a reasonable manner,” Deel told the audience in his opening statement.

Carey said his years of success as a legislator has revolved around his listening to his constituents.

Both candidates agreed that education is the first step to job creation but differed on state funding to reduce discrepancy between the wealthy and economic disadvantaged school districts.

“It increases funding to the rich districts,” he said. “And I would focus resources into the classroom.”

Deel countered that Strickland “is making strides,” he said. “It will take a lot of bipartisan support to continue to put a higher emphasis on education, educating our young people today for those jobs in the future.”

On the issue of prescription drug use Carey said he wants to see more tracking of pharmacy use and more treatment for addicts.

Deel wanted to balance penalties for abuse with education.

“Ohio is the 47th worst state to do business,” Johnson said, contending that “fiscal sanity,” regulation reform and business tax cuts, were the ways to attract entrepreneurs to the state.

Hadsell said the race comes down to the candidate who can bring jobs into the district.

“A state representative who understands how jobs are developed,” he said, citing the investments the businesses he is associated with have done that.

“If we get our jobs back, it will help our downtowns,” he said.

Johnson wants to see an overhaul of the tax system saying “Ohioans are overtaxed and over regulated.”

The only race to have only one candidate to participate was the race for Lawrence County Commissioner. Challenger Paul Herrell did not show up at the forum.

Malone cited a small laundry list of commission accomplishments since his tenure began in 2003.

“We have operated within the budget,” he said. “Since 2003, we have increased jobs.”

“When we lost our hospital, it was one of the saddest days in Lawrence County,” he said. “Now we have a chance to replace what we have lost.”

Making a way out