Making a way out 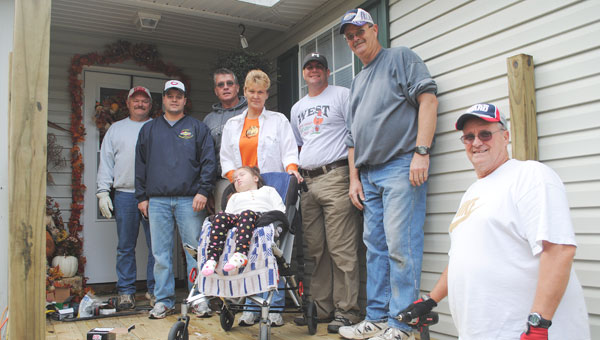 Patricia Walls met with staff at the Lawrence County Early Childhood Center to discuss her granddaughter, Cheyanne, 4, preparing for classes two days a week at the center. In conversation, Walls mentioned the difficulty she was going to have getting Cheyanne in and out of the house. Cheyanne is in a wheelchair and Walls did not have the means to build a ramp from her front door.

Sue Vanderhoof, director of the Early Education Center, talked to her husband, Jeff, about it.

“She and I were sitting out on the front porch one day and she said that she (Cheyanne) was getting a wheelchair, but she didn’t have a wheelchair ramp,” Jeff Vanderhoof said.

Sue Vanderhoof said they didn’t talk much more about it, but Jeff called her the next day from work at Sunoco Chemicals.

“He told the story to the guys who work on his crew and they all decided they wanted to build the ramp,” Sue Vanderhoof said. She said he had even better news — the plant manager of Sunoco Chemicals agreed to purchase all the materials needed for the ramp.

“This is a blessing and a godsend,” Walls said.

Walls, who has had custody of Cheyanne almost all of her 4 years, had been carrying Cheyanne’s wheelchair out of the house first and down the stairs, then going back inside to get Cheyanne and carrying her outside. With Cheyanne now weighing almost 50 pounds, it has become increasingly difficult.

“It’s been tough,” Walls said. “It’s hard just trying to get her outside.”

Cheyanne has been receiving services from the Early Education Center’s program since she was an infant. She has several challenges, not being able to sit, stand, walk, speak or hold her head up.

“She is like a 3 month-old at age 4,” Walls said. Cheyanne is able to interact by her facial expressions and Jeff Vanderhoof said he could hear her laughing while they were hammering outside.

“She loves loud noises,” Walls said with a smile.

Walls is excited about the opportunity this will bring for Cheyanne.

“She loves interaction with other people, especially children. But with her not having the proper stuff to get her in and out and off and on the school bus, she has been homeschooled,” Walls said. “This will make a world of difference.”

The men who helped Jeff Vanderhoof build the ramp include his brother, Mike Vanderhoof, along with Jeff Keller, Dusty Salyers, Mike Mershon and Donnie Parsley. Mike Vanderhoof is retired from Sunoco Chemicals, but the rest of the men are still employed there and live in Wheelersburg.

“Thank God for these guys,” Walls said. “There are still good people in this world who want to help people.”

Students sit in for sitar demonstration