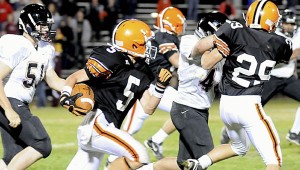 Are those linemen or is there an eclipse?

Size is the operative word for the Jackson Ironmen who will try to utilize their girth to push around the Ironton Fighting Tigers when the teams match 5-1 records Friday at Jackson.

The average weight of the five interior linemen and the tight end is 235 pounds.

“Their size is a major concern. You have to worry about them getting on you and just powering the ball down the field,” said Ironton coach Bob Lutz.

Brothers Austin Landrum and Bubba Landrum are the biggest of the linemen. Austin is a 6-foot, 310-pound right tackle while Bubba is a 6-1, 315-pound right guard.

The backfield isn’t void of size, either.

Quarterback Kip Winchester (6-0, 180) has proven to be a duel threat in the offense. Winchester has 55 carries for 271 yards or 4.9 yards a carry with three TDs. He is 33-of-61 passing for 643 yards and nine touchdowns and three interceptions.

“They have a lot of size and like to power the ball, but they’ve made a lot of big plays, too,” said Lutz.

The Jackson defense isn’t as big, but they have enough size to give Ironton’s offensive line problems.

“They have good size up front, but their linebackers are the key. They move well and get to the ball,” said Lutz.

Tray Valentine (6-1, 26) and Ervin are the outside linebackers with Arthur and Jeffers on the inside.

Ironton leads the all-time series 34-6-7 and has played more games in the 7-year history of Alumni Stadium than any other opposing team. Two of those games were in the playoffs.

“We’ve had our troubles there against Jackson,” said Lutz. “We won there last year, but Wilks ran a punt back for a touchdown and we hit a long pass to (Jon) Monnig. We had to battle last year and we’ll have our hands full this time.”

Ironton will have some added troubles this year since they must play the game without leading rusher and cornerback Tres Wilks who was ejected last week in the first quarter. Wilks had 551 yards rushing on 52 carries for a 10.6 average and he has scored eight touchdowns.

Backup halfback Dion Brown has been lost for the season along with tight end and cornerback Michael Lawless, both with shoulder injuries.

A quick look at the preview sheet shows the Coal Grove Hornets with a 5-1 record and the Rock Hill... read more