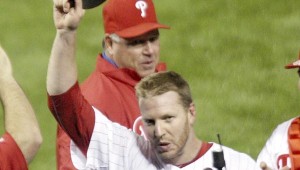 Roy Halladay of the Philadelphia Phillies tips his cap to the crowd after throwing a no hitter in Game 1 of the NLDS Series against the Cincinnati Reds at Citizens Bank Park in Philadelphia on Wednesday. The Phillies won, 4-0. (MCT DIRECT)

The Associated Press
PHILADELPHIA — Roy Halladay spent his whole career waiting for this start, wondering what it would be like to pitch in the playoffs.

It was better than he — or anyone else — could have predicted.

Halladay threw the second no-hitter in postseason history, leading the Philadelphia Phillies over the Cincinnati Reds 4-0 in Game 1 of the NL division series on Wednesday.

“It’s surreal, it really is,” Halladay said. “I just wanted to pitch here, to pitch in the postseason. To go out and have a game like that, it’s a dream come true.”

Don Larsen is the only other pitcher to throw a postseason no-hitter. He tossed a perfect game for the New York Yankees in the 1956 World Series against Brooklyn. The 54th anniversary of Larsen’s gem is this Friday.

Halladay took the Year of the Pitcher into October. The excitement spread beyond Citizens Bank Park — the last two outs were shown on the video board at Target Field, where the Twins were preparing to play the Yankees, and Minnesota fans cheered.

The All-Star right-hander, who threw a perfect game at Florida on May 29, dominated the Reds with a sharp fastball and a devastating slow curve in his first playoff start.

The overmatched Reds never came close to a hit. Halladay allowed only one runner, walking Jay Bruce on a full count with two outs in the fifth, and struck out eight.

“To get a no-hitter in this fashion, in your first postseason game, you’ve got to put it right up there,” Phillies first baseman Ryan Howard said.

Halladay threw 104 pitches, 79 for strikes. This was the first no-hitter against the Reds since 1971, when Philadelphia’s Rick Wise beat them by the same 4-0 score.

“It’s no fun out there,” Reds slugger Joey Votto said. “It’s like trying to hit nothing. He’s an ace among aces.”

Halladay spent 12 seasons with Toronto, far from the postseason. A trade last December brought him to the defending two-time NL champions, and gave him this chance.

“This is what you come here for,” Halladay said. “It’s a good team, they know how to win. … It’s been a great year, a fun year, we obviously have a ways to go.”

With a sellout crowd standing in the ninth and chanting “Let’s Go, Doc!” Halladay got a loud ovation when he jogged to the mound to start the inning.

Ramon Hernandez popped out to second baseman Chase Utley for the first out. Pinch-hitter Miguel Cairo then fouled out to third baseman Wilson Valdez.

Halladay then retired Brandon Phillips on a tapper in front of the plate to end it. Catcher Carlos Ruiz pounced on the ball, getting down on his knee as the ball rolled near Phillips’ bat, and made a strong throw for the final out.

“If I was catching, I probably would’ve picked up the ball and bat and threw them both,” Phils manager Charlie Manuel said.

Halladay pumped his fist into his glove as Ruiz rushed to the mound. Just like catcher Yogi Berra did with Larsen, Ruiz started to jump into Halladay’s arms. Unlike Berra, the 5-foot-8 Ruiz didn’t wrap up his pitcher in a bear hug.

“I felt like we got in a groove early,” Halladay said. “Carlos has been great all year, he helps me get into a rhythm early, throwing strikes.”

Phillies aces Roy Oswalt and Cole Hamels ran out of the dugout side-by-side to congratulate the other member of Philadelphia’s Big 3. Pretty soon, everyone in a Phillies uniform was part of the victory party.

Shortstop Jimmy Rollins made the toughest play to preserve the no-hitter, going deep in the hole and making a strong throw to retire Votto in the fourth.

Pitcher Travis Wood hit a sinking liner to right that Jayson Werth caught in the third. Pinch-hitter Juan Francisco hit a hard grounder up the middle in the sixth, but Rollins scooted over and made it look easy.

There were five no-hitters in the majors this year as pitchers dominated. But five no-hit bids got broken up in the ninth inning, too.

The last time a pitcher came close to a no-hitter in the postseason was quite a while ago. Boston’s Jim Lonborg went 7 2-3 innings against St. Louis in the 1967 World Series before Julian Javier broke up it with a double, STATS LLC said.

The Phillies led the majors in wins (97) for the first time in franchise history, captured their fourth consecutive division title and are trying to become the first NL team in 66 years to win three straight pennants.

They are prohibitive favorites in this best-of-five against the NL Central champion Reds, who are making their first postseason appearance since 1995.

Game 2 is Friday at Philadelphia.

The 33-year-old Halladay topped the NL in victories and led the majors in innings, shutouts and complete games. He was at the top of his game from the get-go in Game 1.

A determined, intense Halladay got ahead of hitters and worked quickly. He threw first-pitch strikes to 17 of the first 18 batters.

“It was great managing,” Manuel joked. “He was very good. He had a tremendous feel. He sold his pitches well.”

Halladay even did it at the plate. He ignited a three-run, two-out rally in the second with an RBI single.

On the opposite side, 27-year-old Edinson Volquez looked like a postseason rookie. He never seemed to get comfortable on the mound, taking his time between pitches, tugging at his cap and long dreadlocks and breathing deeply. At one point, Hernandez, from his crouched position behind the plate, motioned for him to calm down.

Volquez allowed four runs and four hits in 1 2-3 innings. The hard-throwing right-hander was 4-3 in 12 starts this season after returning from elbow surgery.

Halladay was so eager to join the Phillies that he passed up a chance to test free agency after this season and signed a $60 million, three-year extension to complete a trade. Halladay probably would’ve received the richest contract ever for a pitcher if he held off, but he wanted to play in Philadelphia.

There was much talk down the stretch about Halladay’s inexperience in the postseason. The Phillies also have Oswalt and Hamels. Both pitchers have been dominant in previous playoff games, but Halladay got the ball and didn’t disappoint.

Halladay got his first strikeout in the second, fooling Scott Rolen on an 85 mph changeup. He caught Rolen looking at a fastball on the outside corner to start the fifth, and fanned him again on a 79 mph changeup in the seventh.

The Phillies gave Halladay all the runs he would need in the first.

Shane Victorino sliced a one-out double down the left-field line. He stole third and scored on Utley’s sacrifice fly to right. A fired-up Victorino slid headfirst barely ahead of Bruce’s strong one-hop throw, got up and patted plate umpire John Hirschbeck on the behind on his way to the dugout.

Ruiz drew a two-out walk in the second and Valdez bounced an infield single that shortstop Orlando Cabrera fielded on the second-base side of the infield. Halladay then hit a hard liner to left that fell in ahead of Jonny Gomes’ sliding attempt. Ruiz scored to make it 2-0. After Rollins walked to load the bases, Victorino chased Volquez with a two-run single.

With the crowd waving their white-and-red “Fightin’ Phils” rally towels, Victorino fouled off consecutive 3-2 pitches before lining a hit to left-center for a 4-0 lead.

The Phillies got swept by the Reds in the 1976 NLCS. Philadelphia won a franchise-record 101 games that season to snap a 25-year playoff drought. But the Phillies ran into the Big Red Machine, which swept through the postseason to win its second consecutive World Series title.

It’s a reversed situation now. The Phillies — call them the New Red Machine — are perhaps in the middle of a dynasty, while Cincinnati is the young team on the rise.

Notes: Former Phillies LHP Scott Eyre, a member of the championship team in ’08, threw out the first pitch. … Phillies 3B Placido Polanco was scratched with a sore back. He expects to play Game 2. … The Phillies swept a tight four-game series in Philadelphia heading into the All-Star break, winning by scores of 4-3, 9-7, 1-0 and 1-0. … Halladay hit .141 (13 for 92) this season.

The Associated Press PHILADELPHIA — Edinson Volquez looked as if he was making his first postseason start, and the jittery... read more