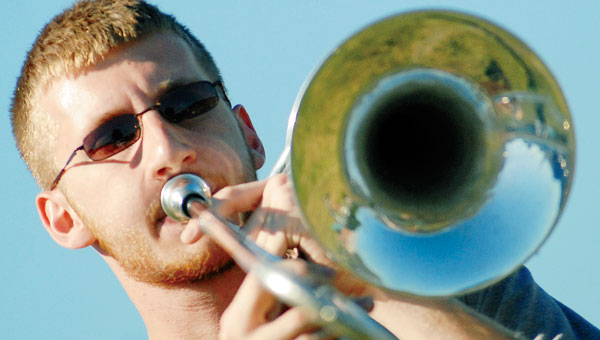 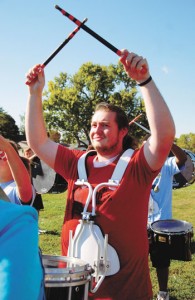 Jeremy Boggs, co-drum captain, plays the snare drum during practice with other members of the Ironton High School Million Dollar Marching Band. The band is preparing for the upcoming Buckeye Classic competition. THE TRIBUNE/JESSICA ST. JAMES

If you live in the vicinity of Ironton High School, you can probably hear percussion, brass and woodwind sounds floating on the breeze during football season.

The sounds make up the 85 IHS students in the Million Dollar Band.

They, like many other marching bands, have been preparing for the 2010 Buckeye Classic, which begins at 5 p.m. this Saturday. But, unlike the other bands, they will not be competing.

They will be closing out the night of 15 bands with an exhibition show of some of Journey’s biggest hits.

The Million Dollar Band is not in the business of competing, but of entertaining, said Will Smith, assistant band director. He said that has been Jeff Sanders’, IHS band director, vision.

“This all really leads back to Mr. Sanders’ goal of trying to emulate Mr. Falls, he was the old band director back in the 60s and 70s, Ralph Falls,” said Smith. “We just dedicated the bandstand in honor of him and that’s what (Sanders) strived to re-emulate is that show-band mentality that he set up back then.”

Smith said he has seen a noticeable change in the crowds during the shows at the IHS football games.

“We’re starting to have a lot more people stay in their seats over the past couple of years than years previous,” he said.

The marching band also changes its show every three weeks to keep the crowds entertained.

“Its something that I think the whole town enjoys more,” Smith said. On Friday night, you don’t know what songs are coming at you. It’s a little easier to entertain that way.”

The show on rotation for the Buckeye Classic is a selection of songs from the band Journey. The opener is “Any Way You Want It.” The ballad is “Open Arms” and the closer is everyone’s favorite, “Don’t Stop Believin.”

Listen for solos from Dylan Forbush on trumpet and Ryan Morgan on trombone in “Open Arms” and London Brown on trumpet in “Don’t Stop Believin.”

“The music is really powerful,” said senior Audrey Stewart. This is her second year as Field Commander.

“All the band members really enjoy it, so they’re passionate about learning it. They work really hard on it,” Audrey said about the Journey songs.

And as for not competing, the band members said they would rather entertain the crowds.

“I think we have a lot more enjoyment out of it, when we don’t set our goals as a competition goal, we set it as we want to have fun and that’s that main goal,” said Audrey. “The main goal is to entertain the people. We get more out of the crowd standing up and clapping than we would a score.”

COAL GROVE — Those who loved Sgt. Justin Bradley Allen and want him remembered by generations to come are getting... read more