The fruits (and vegetables) of labor 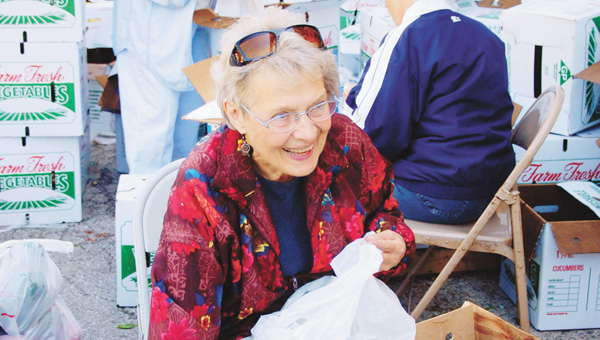 This is the third time Community Mission Outreach has put this together. About 30 volunteers helped to distribute potatoes, cabbage, apples, green beans, peppers, onions, squash, carrots and zucchini to families who met the income guidelines. The food came from Second Harvest Food Bank in Logan, Ohio, and farmers along with the Ohio Department of Agriculture.

Some recipients of the produce prolong the benefits of it. Wayne Crank, 54, of South Point, received some produce last year and canned the potatoes.

“It’s important, really, as bad as the economy is,” Crank said. “It’s nice of them to do that. It really helps.”

Lisa Jackson, 47, of Chesapeake, first received help from the Community Mission Outreach a couple of years ago. She supports four people in her house and said it’s hard to keep enough food in the house.

“I’ve got two growing kids, and they love to eat,” Jackson said.

Sherri Dennison, 47, of Proctorville, first needed help about three years ago, and while her husband raises a garden, there are still times when food is hard to come by.

“I don’t use it monthly, just when I need it,” Dennison said.

Booth is thankful for all of the volunteers that serve at the Community Mission Outreach.

“A lot of the time it’s the same people who keep volunteering,” Booth said. “They’re dedicated.”

Booth said he benefits from his work there as much as the people seeking help there.

“It’s rewarding to me,” Booth said. “If you have peace of mind, you’re well ahead of everybody else.”

Booth joked that sometimes his wife gets a little aggravated for him doing so much, he loves what he does and feels it’s necessary.

“It’s nice to be able to help people,” Moore said.

“With the economy today, the need is out there,” Booth said.

Charli Bowman hands out raffle tickets for many various drawing during a benefit for Sgt. Justin Allen Saturday at Paul... read more