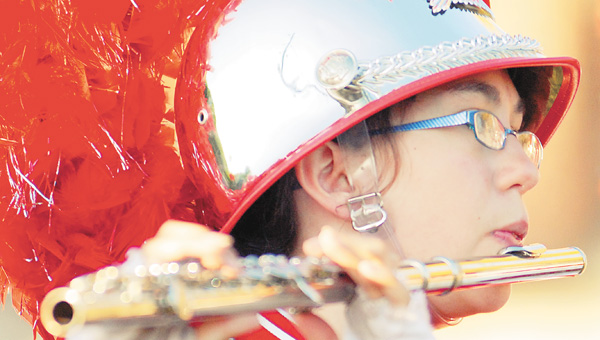 Rachel Clark with the Rock Hill High School band plays the flute during a warm up before performing in the Ironton High School Buckeye Classic at Tanks Memorial Stadium.

The sweet sounds of marching band music could be heard rising from Tanks Memorial Stadium Saturday night. Ironton High School hosted the Buckeye Classic Marching band competition. The competition brought in high school bands from all over the state and surrounding states that battled for bragging rights and the chance to compete at the state finals competition.

The stakes were high for the Dawson-Bryant High School Hornet “Band of Pride.” The Classic was the second competition of the day for the band, which also competed and qualified for the state finals at Green High School Saturday.

Before Saturday, the school had never qualified for state at more than two competitions in a given year, explained freshman trumpet player Brianne Neff and sophomore trumpet player Taylor Mihm before the competition. 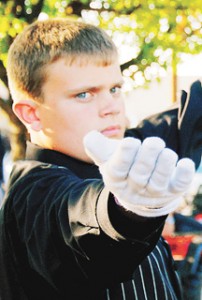 For other, more experienced musicians, the nerves were a thing of the past.

“This is my fourth year,” Vincent Fowler, a senior snare drummer from Vinton County High School. He added that he was confident in himself and his fellow band members. Fowler’s school had also competed at Green earlier in the day.

“We got straight 2s,” he said indicating the band’s scores. “It’s decent but we can do better.”

“It’s kind of business as usual,” he said. “They seem pretty calm. They’ve got to go out and do it. They’re excited of course.”

The competition is sponsored by the Ironton High School Band Boosters, the members of which work hard on the event, Will Smith, assistant band director of Ironton’s marching band, said.

“It takes an uncounted amount of hours to plan and prepare for this thing,” Smith said. The band boosters were out late Friday night at an away game and were at the high school by 8 a.m. Saturday to set up for the event, which started at 5 p.m.

“We’ve got a super group of band boosters who have put on this event for many years before me and I’m sure many years after me,” Smith said.

“It’s huge. It’s part of the culture that is marching band,” Smith said.

The IHS Million Dollar Marching band did not compete in the competition, but performed as an exhibition at the end of the night.

“Each year we’re working a little more to return to our roots,” Jeff Sanders, band director, said. “Our numbers are up, which is exciting. They’re young but they’re energetic and that’s a great combination.”

The bands were rated by 10 judges from the Ohio Music Education Association. Bands that received a superior rating are qualified to go on to the state competition at the end of the month.