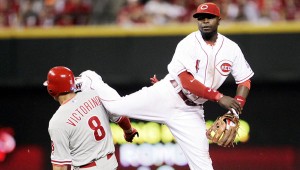 Philadelphia Phillies’ base runner Shane Victorino gets kicked in the face by Cincinnati Reds second baseman Brandon Phillips as he slides too high into second base in Game 3 of the National League Division Series on Sunday. The Phillies won 2-0 to sweep the NLDS series and eliminate the Reds. (MCT DIRECT PHOTO)

Another ace, another dominating performance.

Hamels struck out nine in a five-hitter, Chase Utley homered and the Phillies beat the Reds 2-0 on Sunday night to finish off the franchise’s first playoff sweep.

Philadelphia, trying to become the first NL team in 66 years to win three straight pennants, will host San Francisco or Atlanta in the NLCS opener on Saturday. The Giants beat the Braves 3-2 Sunday to take a 2-1 lead in their best-of-five division series.

Halladay opened this matchup with the second no-hitter in postseason history. With Hamels and Roy Oswalt also rested and ready to go for the next round, look out.

“Having three starters definitely helps,” Hamels said. “The playoffs are all about pitching.”

The Reds, making their first postseason appearance in 15 years, committed six errors in the last two games of the series after finishing second in the NL with a club-record .988 fielding percentage during the regular season.

The NL’s top offense managed only 11 hits in three games — the fewest for a team in a postseason series, according to STATS LLC. The previous low was 13 by Texas against the New York Yankees in 1998.

Hamels got Joey Votto to ground into a double play after Brandon Phillips’ leadoff single in the ninth, then struck out Scott Rolen to end the game. The lanky left-hander threw 119 pitches in his first postseason complete game, 82 for strikes.

After Rolen struck out for the eighth time in the series, Hamels pumped his fist and the Phillies celebrated with a few chest bumps and a handshake line before returning to the locker room for more champagne.

Of course, it all looked very routine — Charlie Manuel’s team has practiced this a lot over the past couple of years.

“I think when you have that playoff experience and you’ve been able to go to the World Series the past two years in row, you know what it takes to get there,” Hamels said. “We don’t want to get too carried away. … We’re just going to move on and play the best baseball we can.”

Utley, greeted with loud boos and chants of “Cheater! Cheater!” before each at-bat, connected against Johnny Cueto in the fifth, giving the Phillies a 2-0 lead. It was his 10th career postseason homer, moving him past teammate Jayson Werth and into first on the club’s career list.

Utley started Philadelphia’s winning rally in Game 2 when he was hit by a pitch from hard-throwing reliever Aroldis Chapman in the seventh inning. The All-Star second baseman acknowledged after the game he wasn’t sure if the ball hit him, and a record crowd of 44,599 at Great American Ball Park made it clear what it thought of the play.

Umpires reviewed Utley’s drive to right-center to see if a fan interfered with the ball, but the replays were conclusive and the call was quickly upheld.

No cheating here. Just another timely drive for the NL East champs.

The Reds never regained their footing after Halladay shut them down in the series opener. The surprise NL Central winners led 4-0 in Game 2 but quickly fell apart, committing four errors in a gut-wrenching 7-4 loss that put them on the brink of elimination.

Hamels took it from there.

The 2008 World Series MVP, quite the luxury to have as a No. 3 starter in the postseason, increased his perfect mark against Cincinnati to 7-0 in eight career starts. He also improved to 6-3 in 11 postseason outings.

“I have that sort of positive energy every time I come here,” Hamels said.

Hamels allowed only two runners to reach second and none of the Reds got to third. He also got some help from his defense in the first when center fielder Shane Victorino sprinted into the gap in left-center to grab Phillips’ liner with speedy Drew Stubbs on first.

Cincinnati’s fielders were not so helpful to Cueto.

Shortstop Orlando Cabrera, a late addition to the lineup, made an errant throw in the first that allowed Placido Polanco to score an unearned run, quieting the towel-waving crowd desperate for something to cheer about. Third baseman Scott Rolen mishandled Carlos Ruiz’s grounder in the sixth but Homer Bailey got Hamels to fly out to end the inning.

Cincinnati chased nemesis Oswalt early in Game 2, but was still impressed with the Phillies’ trio of starters.

“Those three alone can probably take them to the World Series and win it,” Votto said.

Hamels closed the regular season with a flourish, going 5-1 with a 1.48 ERA in his final seven starts, and picked up right where he left off. He walked none and was in complete control throughout.

Cabrera aggravated his injured left side Friday night and was in danger of being removed from the postseason roster before he fielded grounders and took batting practice prior to Game 3. Reds manager Dusty Baker decided to insert him into the lineup after he said he felt fine, removing slick-fielding Paul Janish.

The move backfired in the first. With two outs and runners on the corners, Werth hit a grounder to Cabrera and his throw pulled Votto off the bag at first. Cabrera raised his left shoulder after the play, stretching out his side, and went 0 for 3 at the plate.

NOTES: Hall of Fame 2B Joe Morgan, wearing his No. 8 Reds jersey, got a standing ovation when he threw out the ceremonial first pitch. Morgan was the NL MVP when the Reds won the World Series in 1975 and 1976. … It was an unseasonably warm 77 degrees at first pitch.

CINCINNATI — Josh Freeman had no timeouts to use and a packed stadium screaming for him to make another inexperienced... read more