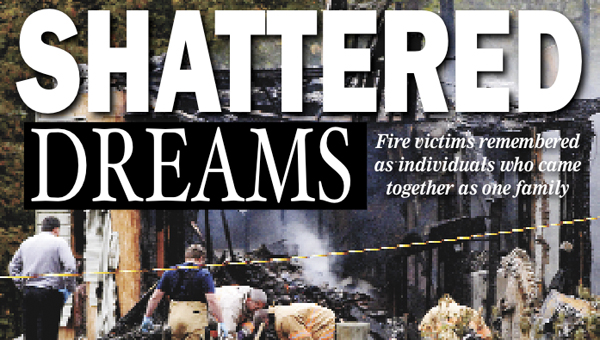 Last week’s house fire in Pedro took the lives of five of the 12 people who lived in the large structure. Property owner and fire survivor Katheryn Seagraves Whitmer is speaking out to let the community know about those who were killed.

PEDRO — On Wednesday morning Katheryn Seagraves Whitmer will hear a military bugler sound the wrenching notes of “Taps” as she watches her baby girl buried with full military honors in the new Kentucky Veterans Cemetery across the Ohio River in Greenup, Ky.

It was just before New Year’s Eve in 1988 when Rachel Whitmer was born. Last week, the young woman perished in the inferno that consumed the 12-bedroom house she had called her home.

It was a home that Katheryn had created six years ago as a refuge for those hurting, those in need, those wanting family.

“They thought it was a drug house, but we were a group of people who had come together both financially, emotionally,” Katheryn said. “We had become a family. … We all pooled our resources.”

There was Josh Murrell, the best friend of Katheryn’s youngest child, Kyle Whitmer.

Murrell was one of the seven who made it out alive in those early morning hours on Oct. 4. Rachel did not. Ashley Keaton and her infant son did not. Jackie Sizemore and Becky Hall did not.

Now Katheryn is speaking out about those 11 she lived with, remembering how they called her “Mama,” how they came to her for advice, how they shared their hopes.

There was Jacqueline Rose Sizemore, 20, who was studying early childhood development.

“Jackie was such a sweet-hearted girl,” Katheryn said. “She wanted to work with kids.”

There was Rebecca Sue Hall, 38, working on her GED with the hope of reaching out to victims of domestic violence.

“Becky, she was such a bright light in the house,” she said. “You very seldom did not see her smiling.”

Hall had spent her last weekend with her first grandson, Brice James Taylor.

“She got to keep him for the whole weekend,” Katheryn said. “He was born the second of September. He was so tiny. Everybody out at the house called him B.J.”

And then there was the smallest, Xzavier Ryan Keaton, Ashley’s 8-month-old son.

“He was such a sweetheart,” she said. “We would pack him around like a sack of potatoes.”

It had always been Katheryn’s desire to create a warm, inviting sanctuary for others. When she saw the rambling bluish-gray frame and siding house out on Route 373, she thought she was reaching her dream.

That turned into a house payment of under $500 a month; all that was left was to open up the front door as Katheryn was opening up her heart.

Then came that tragic Monday Katheryn will never forget. Dawn was only hours away when the fire broke out in the breezeway of the house, so rurally isolated that firefighters had to truck in the 40,000 gallons of water to fight the blaze.

“As soon as I opened my door, it hit me,” she said. “I tried to make it through my kitchen and the plant room where the fire was at. As I was going back I fell. I literally crawled out the front door.”

Kyle Whitmer grabbed a garden hose and tried to spray down the blaze.

“He kicked in the front door and the heat literally pushed him back off the front porch,” she said. “He tried and tried to help.”

Out on her front yard Katheryn, her foot scorched from hot metal, could only watch.

“My legs just wouldn’t take me anywhere,” she said. “All I could do was scream.”

Fire investigators say the deadliest fire so far this year in the state probably started as an electrical malfunction. Whatever the cause, it has wrenched families forever.

Now, Katheryn, supported by her children, spends her days going to funeral homes and cemeteries, saying her final goodbyes.

“I have two more to go to. My own daughter will be the worst,” she said. “That is when it will hit me.”

But the resilient woman understands she must forge a new path and says how grateful she is for the many benefits strangers are holding for her and the other fire victims.

“I have had people tell me that I have been their miracle, even giving them shelter,” she said. “Right now I have to keep the faith that there are people out there who still believe in the golden rule and will step up and help us.”

And for those five who will never call her “Mama” again, Katheryn believes they aren’t really gone.

“I feel five angels around me,” she said.

In a few short weeks, the streets will be filled with witches, ghosts, princesses and the occasional Iron Man. When... read more