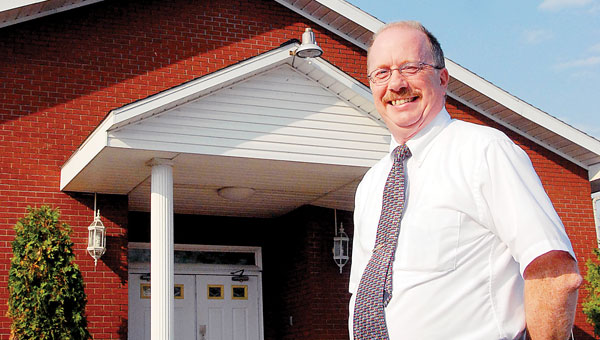 Pastor Jeff Cremeans stands outside the City Mission Church in Ironton on North Fourth Street. Jeff has been pastor at the church for the past six years, having taken over for his father, Jim. This year the church is celebrating its 66th year.

Ministering to those in need, feeding the hungry, clothing the poor and sheltering the homeless. That is the mission of the City Welfare Mission. For 66 years, many in the community have benefited from the selfless giving.

Jeff Cremeans, current director and pastor for the past five years, said the reason for the continued ministry of the church and the mission is the blessings of the Lord.

“We’ve had a lot of friends that have helped us, the community has helped, and this church helps,” Cremeans said. “Ultimately, it’s the Lord.”

Cremeans said he was speaking at Dow Chemical and a man there told him that many years ago, when he was a child, he and his mother had eaten many meals over at the armory in Ironton, the location where the mission used to feed people. Cremeans said at that time, around 1948, the tables were just sawhorses and 1x2s.

Monday through Friday, the mission provides around 45 meals daily to people who need it. Cremeans said it is not just the homeless, but sometimes people who need a little help making their food last a little longer.

“Over 50 percent of the people we’re helping here are first-time people, not getting enough hours or making enough to make things stretch and they come here looking for help,” he said.

“I’m predicting a lot of help this year, with the economy as bad as it is,” he said.

The mission is run by three paid staff, including Cremeans, and the rest are volunteers. Cremeans said some of the volunteers come from other programs, and some come on their own, just to help out. He said he knows of some volunteers who have been coming for 30 years and are putting in five days a week.

“You couldn’t do this without volunteers,” he said.

A newer volunteer, Michelle Harmon, 24, of Ironton, has been coming in a couple of times a week for the past three months.

“It’s very, very awesome to see the people who come here every other Wednesday and are in need,” Harmon said. “There was a family here last week, and the dad had lost his job. It was a family of eight. To see their faces and how appreciative they are.

“It’s a good experience to be able talk to people,” she said.

“I had a guy come in here the other day saying, ‘You bought me coal about 10 years ago,’” Cremeans said. He said most of the people are very appreciative of the help they receive.

The mission is funded by the United Way and various donations.

The City Mission Church has services four times a week at the church, and additional services at the jail, a high rise, and two nursing homes.

“A lot of missions have chapel services, but we’re a church who has a mission,” Cremeans said. “We’ve been accused of having too many services,” he laughed.

COLUMBUS — Whether convicted murderer Megan Goff will get a new trial in the case of the shooting death of... read more