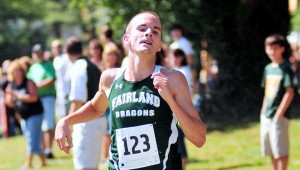 BIDWELL — These Dragons can run.

The Fairland Dragons and Lady Dragons both came away with Ohio Valley Conference cross country championships during the league meet held Tuesday.

Led by Tanner Mattie with the individual championship, the Dragons had a mere 18 points to win the league meet. The River Valley Raiders had 51 points and the Coal Grove Hornets finished with 67 points.

In the girls’ meet, Fairland had 25 points to River Valley 34 total.

Mattie’s winning time of 19:10 was more than a minute better than runner-up and teammate Raine Wireman who ran a 20:13 time. The Dragons’ Ryan Stewart was third at 20:40.

Coal Grove’s Jacob Pauley broke up the Fairland group as he ran a 20:46 to take fourth place. Fairland’s Chad McComas was fifth at 21:05, River Valley’s Trent Wolfe ran a 21:22 and Fairland’s Logan Rowe was seventh at 21:38.

Rock Hill had two runners as Austin Smith ran a 22:22 and placed eighth while Chandler Haskins posted a 30:34 time.

South Point entered four runners led by John Archibault at 25:02 and Dakota Wilburn at 25:09 as they placed 18th and 19th, respectively. Brandon Conley finished with a 33:57 time and Tyler Payne 34:20.

Teams must have at least five runners to qualify for the team standings.

Katie Blodgett of River Valley ran a 24:34 to win the individual girls’ title, but Fairland was won by taking the second, fourth, fifth, sixth and eighth places.

River Valley’s Jessi Hager was third with a 26:17 time and Keyana Ware was seventh at 27:50. Carissa Wolfe was the next Lady Raider as she finished 14th with a 32:43 time and three spots back was Sonja Rankin at 33:45.