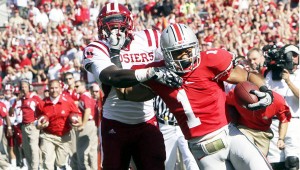 Ohio State Buckeyes running back Dan Herron (1) fends of Indiana Hoosiers defensive back Donnell Jones (10) for a touchdown during the first quarter of their 38-10 last Saturday in Columbus. (MCT DIRECT PHOTO)

COLUMBUS — Terrelle Pryor contemplated the question and then smiled.

So what do you remember about the final drive the last time you played at Wisconsin?

Pryor and the Buckeyes return to the scene of that game on Saturday, this time as the nation’s No. 1-ranked team. A lot of people haven’t forgotten the fourth-quarter comeback in 2008, the fumble that sat forever on the turf, and Pryor’s 11-yard dash around left end for the winning touchdown with 1:08 remaining in a 20-17 Ohio State victory.

It was a coming-out party for the freshman, now one of the top quarterbacks in the country.

“I felt like Terrelle, it was his first big game as a starter,” wide receiver DeVier Posey said. “It was sort of like he was born that day, if that sounds right.”

“I remember it was crazy,” Ohio State defensive lineman Dexter Larimore said. “That was the most vivid memory, of just thinking, ’Whew, man. Leaving it in the offense’s hands is sort of a scary thought here.”’

Pryor was making only his third collegiate start after taking over for fifth-year senior Todd Boeckman. He had never seen a rush like Wisconsin’s, had never played in a game before anything resembling the loud and raucous crowd at Camp Randall Stadium.

This was a world away from his last start for Jeannette High School in Pennsylvania.

“The last drive, I really thought that a young guy like Terrelle was a little calmer than I thought a young guy could be,” Ohio State coach Jim Tressel said.

“We were about 80 some yards away and he stood in the pocket and nailed a couple balls in there. Now, he threw a couple up there that were a little scary in that last drive, but I thought his calmness and his focus — you know, for a young guy, he certainly didn’t seem to be affected by the difficulty of the defense and the difficulty of the crowd.”

Ohio State’s Beanie Wells had been hampered by an injured foot that sidelined him for three games and had required him to wear a protective lineman’s shoe when he returned to the lineup. But Wells teamed with Pryor to lead the way back down the field.

Pryor twice hit wide receiver Brian Hartline for big gains. On the second, Hartline fumbled after a 27-yard pickup, the ball sitting on the ground before teammate Brian Robiskie beat a couple of Wisconsin defenders to it.

“When Hartline fumbled it and Robo picked that fumble up, I remember just finally being able to breathe,” Posey said. “I felt like the ball was on the ground for, like, 20 seconds.”

Robiskie’s recovery helped the Buckeyes retain possession at the Wisconsin 35. Wells then carried three times and Pryor picked up a first down on a sneak with 2 minutes left.

Wisconsin safety Jay Valai had dished out thunderous hits earlier in the game that knocked out running back Dan Herron and wide receiver Dane Sanzenbacher.

“I was definitely out before I even hit the ground,” said Herron, now the Buckeyes’ go-to back. “I actually really didn’t know what happened until we came back here and I actually saw it on film.”

After Pryor’s keeper for the first down, Ohio State placed Wells out wide. Pryor took the snap and ran along the line of scrimmage, and Valai focused on Wells getting the pitch. Instead, Pryor kept the ball and scissored inside left tackle, skirting defenders on the touchdown run.

Wisconsin running back John Clay, a backup then, vividly remembers the pivotal play.

“We had some miscues before the ball was snapped,” he said. “We moved the ball pretty well against them. We thought we had a chance to win that game, but they got the missed signals on the defensive side. (Pryor) was able to jump the gun and score.”

Pryor remembers only that the rowdy Wisconsin band — which had been suspended for the game due to unspecified transgressions — had been muted.

“The only thing I can remember, it was kind of loud but (it was quieter) without the band — those drums and stuff beating,” he said. “It’s going to be a different atmosphere on Saturday.”

The band will indeed be back Saturday night. So will Wisconsin defensive back Aaron Henry, who vows the Badgers will be ready for Ohio State and for Pryor.

“It is kind of like anybody playing the Chicago Bulls and anybody playing the L.A. Lakers,” he said. “They are going to try and shut Kobe down or they are going to try and shut Michael Jordan down, to force everybody around them to beat them. I am not comparing Terrelle Pryor to Michael Jordan or Kobe Bryant, but his athletic ability is unheard of.”

That ability first revealed itself on a cool, October night two years ago.