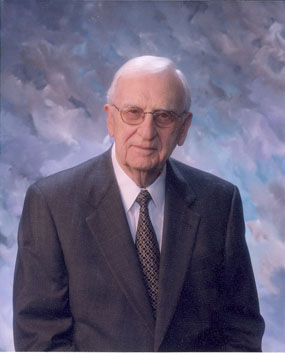 He graduated from George Washington University in 1942 and received his law degree from the University of Cincinnati in 1949. He served in the United States Army in the Philippines and received the Bronze Star Medal for meritorious achievement. He also served from 1939 – 1943 as a treaty analyst with the U.S. State Department in Washington, D.C. under Secretary of State Cordell Hull.

Upon receipt of his law degree, he was employed as claims counsel and later as supervisor of claims for Mutual of Omaha for Ohio, West Virginia and Pennsylvania, and resigned to enter private practice, and joined the former law firm of Andrews & Byrne in Ironton on May 15, 1955.

He was a lifelong member of St. Lawrence O’Toole Church in Ironton, and first met his wife, Ruth, on the steps to the front door of the church.

In addition to his parents, he was preceded in death by his only sibling, his brother, John “Jack” Klein.

Visitation with the family will be from 6 p.m. to 8 p.m., with a prayer service at 8 p.m. on Monday at Tracy Brammer Funeral Home in Ironton. Mass will be celebrated at 10:30 a.m. on Tuesday by Father David H. Huffman at St. Lawrence O’Toole Church with burial immediately thereafter at Calvary Cemetery.

In lieu of flowers, friends may make contributions in his memory to St. Lawrence O’Toole Church or to The Poor Clares, 4108 Euclid Ave., Cleveland, OH, 44103.

God cares about us, how we treat one another

God cares. There are many theological and ethical issues debated and discussed in today’s religious community, as has always been... read more