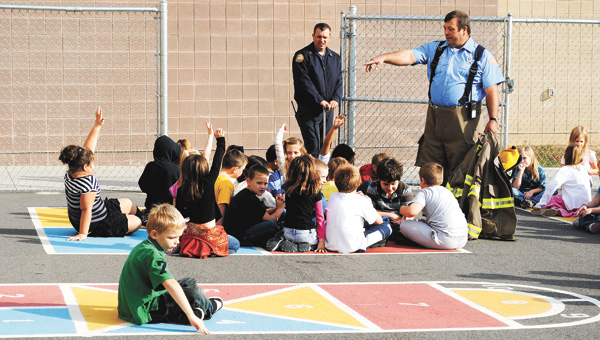 The Ironton Fire Department helped the students at Ironton Elementary School become more informed about fire safety and fire prevention Monday, as part of a yearly visit they do around the community.

The firefighters answered questions, gave the students a tour of the fire truck and showed a video that explained everything a person would need to know about fire safety.

Firefighter Joe Marshall answered questions like, “What do we do if there is no way out of the house?” Marshall instructed the students that if a doorway is blocked, use the window. He also assured them that the fire department would do everything they can to get them out safely. He reminded the students the importance of staying outside after they have made it out, and to practice fire drills with their families.

Lt. Jeff Joseph said their main mission at the school was to go over fire prevention, what to do if clothing catches on fire, and helping the students know how to call 911 in an emergency.

“It’s everything you want to get across to them,” Joseph said. He said another important piece of advice is for children not to hide. He said sometimes if a child is frightened, that’s what they do.

Joseph said their purpose for talking to the students is a big one.

Lt. Jack Delong said children can be very instrumental in keeping a family safe in a fire.

“Kids this age have been more able to remember this stuff,” he said. “Often for parents, it’s been too long since they’ve learned it to remember.”

Katelyn Hay, a third-grader, said she liked that the fire department came and that she got up close to the fire truck.

“They had a 500-foot hose!” she said excitedly. “Mrs. Black said that might go two blocks.”

Brock Bollinger, first-grader, said his favorite part was to see the gas masks. He also leaned some important information.

“Never play with lighters or matches,” he said.

Dedrianna Reper, first-grader, said something she learned was the exit strategy.

“If you can’t go out the front door or back door, go out the window,” she said.

Emily She said she has been in a scary situation before where their smoke alarm went off during the night, but her family made it safely to the neighbor’s house where they called for help.

“I was scared of fireman, but that day helped me,” she said.

If you have ever wondered what kind of events go on at Ohio University Southern, or what kind of programs... read more