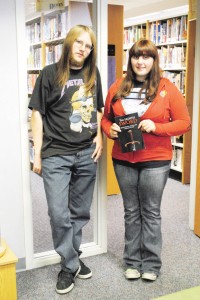 David and Kristina Lilly display the book they wrote with their grandfather. THE TRIBUNE/JENNIFER CHAPMAN

CHESAPEAKE — When David Lilly was in fifth grade, a teacher told him he could probably write a book, so he did.

That’s how he described his reason for writing the book “The Swords of Athos” with his grandfather, Edwin F. Roble, which was published in 2009. David said he wanted to do the book with a family member, to make it mean something.

Kristina said her reason for wanting to join the pair on this book was simple.

“I was jealous,” she laughed. Kristina was 10 when her brother was working on the first book with his grandfather. She said she thought, “This isn’t fair. I want in on this.”

She said they started working on the book when she was 12 and finished up about a month and a half ago. Her grandfather was able to finish his contribution to the writing before he passed away in December.

“I’m really excited,” Kristina said about the book. “It’s something I got to do with my grandpa and David. It’s one of the last things he did when he got sick.”

Writing this book with Roble was special to David as well.

“It meant a lot to me,” David said. “My father had died when we started this and it gave me what I needed. It gave me support.”

Kristina said her grandfather was good help when she and David had moments when they didn’t agree on something in the story.

“Grandpa would step in and say, ‘Why don’t we try it this way?’” she said.

“The Eighth Sword” is a fantasy book that follows “The Swords of Athos,” where the characters find another world, in addition to the seven they already knew of, and their search to find the magical sword that protects it.

David said his favorite part of writing is the creativity it brings.

“With real life, it’s straightforward,” he said. “In writing you don’t have consequences.”

The thing Kristina enjoyed most about writing this particular book was what it has done for her family.

“We used to hate each other,” she said. “It has made our family closer.”

Kathi Lilly, David and Kristina’s mother and Roble’s daughter, is very pleased with what they have done.

“I am the proudest mom there could be,” she said. “I could never have thought up some of the stuff they thought up. They are so creative.”

Kathi Lilly said her father loved getting the chance to do this with David and Kristina.

“He had written some novels before, but never published them,” she said. “These meant the most because it was with his grandkids.”

David and Kristina said the book is on sale now, either by contacting them at lillypad_04@peoplepc.com or by going to www.xlibris.com. The book will soon be able to be purchased on the websites for Amazon and Barnes and Noble.

David and Kristina will be at the Chesapeake branch of the Briggs Lawrence County Public Library today at 5:30 p.m., signing books and talking about the book. They will also have copies for sale.