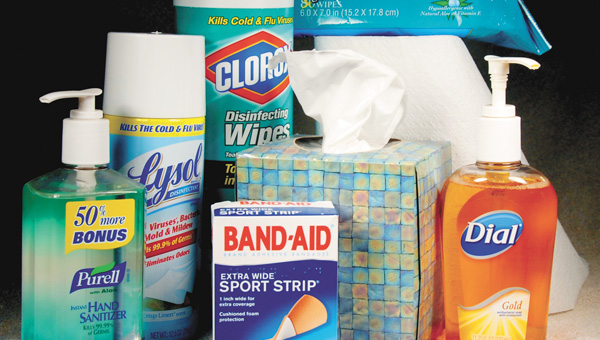 How many tissues, squirts of hand sanitizer or sprays of Lysol does it take to take care of a classroom of 22 students, six and a half hours a day, 180 days each year? The answer is a lot.

At the beginning of the school year, many classrooms send a list of regular school supplies needed for each child, as well some requests for supplies many people might not think of.

Betsy Rawlins, assistant vice president of loan administration at Ohio River Bank, saw the list of her grandchildren’s supplies and became concerned for the parents who would not be able to afford those things, as well as for the teachers who often pick up the supplies with their own money when the supplies start running out.

She began a drive she called “Homeroom Helpers,” asking the community to get involved and make things easier for the teachers of the city and county elementary schools in the area. The kinds of things that would help the classrooms include paper towels, Clorox wipes, Band-Aids, hand sanitizer, Windex wipes, napkins, tissues, baby wipes, spray disinfectant, zip-lock baggies and hand soap. She designated a drop-off spot at the Ohio River Bank on Railroad Street in Ironton.

The original deadline was Sept. 30, but the deadline has been extended to Oct. 31 in hopes of getting more contributions.

“You’d like to take a nice big amount to each school,” she said. “All the school kids were supposed to take something, but that only sees them through half of the year. We just wanted to help by giving them the next half, to wear the teachers wouldn’t have to give the money their paid to provide some of this stuff.”

Rawlins said Homeroom Helpers will compile a thank-you list to area businesses and individuals who help.

“We’d like to make one final push to see if we can get any more help,” she said. “We appreciate what has been given, but to cover the territory we want to cover, we don’t have much. It’s for city and county schools.”

Rawlins said that, while donations are accepted at the bank, if a larger donation needs to be picked up, they will be happy to do it.

“We’re just trying to do everything we can to help the kids.”

SOUTH POINT — It’s more than a rage. It’s the way people communicate nowadays both in and out of the... read more