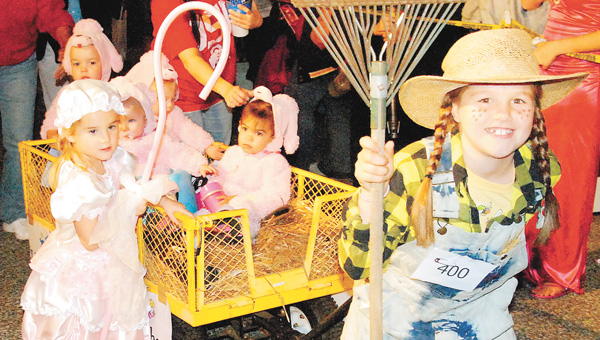 Destiny Comer is the farmer girl while her friend Emily Weber is Little Bo Beep with her little sheep during the Ironton Halloween Parade last year in downtown Ironton. The group placed in the tots category. THE TRIBUNE/JESSICA ST. JAMES

Get out the candy and get your costume ready.

In just a few days it will be time for Ironton’s Safe Trick or Treat. The event will be from 5:30 to 7 p.m. Monday in downtown Ironton.

Those businesses that want to participate but aren’t located downtown get together to pass out candy in the Ironton City Center.

“It’s just a tradition that the city has for children, to provide a safe environment and come through the city building,” Mayor Rich Blankenship said, adding that people from elsewhere in the county also participate in the event.

The mayor guessed that more than 1,000 children dressed up in anything that can be imagined come through the city building during the event.

“We’re looking forward to providing this event again this year for the kids,” Blankenship said.

Directly after Safe Trick or Treat will be a costume parade at 7 p.m. The Ironton Lions Club and Rotary Club sponsor the annual parade, which will start at Third and Center streets and continue to the city parking lot at Second and Vernon streets. There, costume winners will be chosen from the following classifications: witch, patriotic, ghosts, most original and ugliest/scariest.

Winners will be given small monetary cash prizes.

“It’s more about fun than it is about the money,” said Mike Hurley, a Rotary Club member who helps organize the event.

The Lions Club is bringing the werewolf from its haunted tunnel for the parade.

The event usually draws between 300 to 350 children and their families.

“We have a large turn out for it,” Lou Pyles, president of the Lions Club, said. “It has grown. It’s a safe activity for the children to participate in.”

“It’s just sort of an extension of the downtown Safe Trick or Treat and a way to get people to come downtown and something safe for the kids to enjoy,” he said.

Businesses may still sign up to participate by calling the mayor’s office at 532-3833 by Thursday.

Witches, clowns and coffins, Oh my!