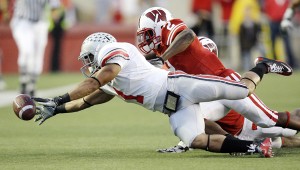 COLUMBUS — Discouraged and downtrodden Ohio State fans won’t be able to count on coach Jim Tressel to offer any consolation or words of encouragement.

Tressel said he’s got enough on his plate just taking care of his players.

“People are going to have their opinions of whether the world ended or it didn’t,” the 10th-year coach said, referring to Saturday night’s 31-18 loss at Wisconsin that ended the Buckeyes’ weeklong stay at No. 1.

“We’ve got to get better today, and I think the people will still get excited about their Buckeyes and there’s a lot of good Ohio State football ahead. But I’m not going to get out beyond (this week).”

With the season barely half over, it’ll take a myriad events for the Buckeyes to get back into the hunt for a national championship.

To be a national contender, the 11th-ranked Buckeyes (6-1, 2-1 Big Ten) need most if not all the 10 undefeated teams in major college football to lose — and they need to win out.

Based on the last game, that latter part might be the hardest.

Wisconsin ran the ball when it wanted to, effectively threw it and never was pressured by the Buckeyes’ defense. Ohio State’s offense had two touchdown drives to start the second half, but was largely ineffective the rest of the night before a raucous, taunting, celebratory crowd at Camp Randall Stadium.

Homan sustained a foot injury and will likely miss at least a couple of games, while Bryant was hospitalized in Columbus with an infected foot and will not practice this week.

For a team already thin on the front line and missing injured mainstays such as hybrid defender Tyler Moeller, those are big blows.

Ohio State’s psyche is a bit bruised, too. There were already questions about whether the Buckeyes’ running game and defensive line. The defeat just added to those concerns.

“When we play them and where they’re at (mentally), that’s all irrelevant to us,” he said Tuesday. “We have to play really well to beat this Ohio State football team, and that’s what we have to focus on, not if they lost last week or won last week or if they’re going to be mad when we get there.”

The Buckeyes find themselves looking up at Purdue and two other teams (Michigan State and Iowa) who are unbeaten in Big Ten play. In order to tie the record for consecutive conference titles (set by Ohio State from 1972-77) — a major goal for the Buckeyes this season — Ohio State can’t afford another loss and will, again, need some help. No. 8 Michigan State (7-0, 2-0) does not play the Buckeyes in the conference’s rotating schedule.

The first step in a turnaround for the Buckeyes begins with practice this week. Tressel and his staff will try to shift the focus off the loss and onto what lies ahead. After hosting Purdue, the Buckeyes play at Minnesota, host Penn State, travel to No. 13 Iowa and then close with archrival Michigan at Ohio Stadium.

There’s still plenty to play for — if the Buckeyes get their heads on straight.

“If it didn’t hurt, you’d be disappointed because our guys do have those expectations,” Tressel said of the defeat. “Our guys do have that passion to please people and everyone is excited when it is going well. Then when it doesn’t, the disappointment is deep. And so one of the great teachable moments we always have is adversity.”

The Associated Press NEW YORK — No disputing this: The Texas Rangers are routing the New York Yankees and are... read more