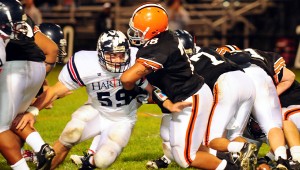 Be ready to look around.

When Fairbanks Panthers’ quarterback Nick Gibson takes the shotgun snap, the football will go in almost any directions.

The Ironton Fighting Tigers will have to figure out which direction and react quickly when the two teams play in their first-ever meeting Friday night at Tanks Memorial Stadium.

While the offense starts with the snap to quarterback, there is no guarantee he will end up with the ball. The 6-foot-1, 199-pound Gibson is a returning starter who leads the team in passing and is second in rushing but likes to spread the ball around.

“Their quarterback is a good athlete who can run or throw and he won’t hesitate to do either one,” said Ironton coach Bob Lutz. “He’s got a good running back to go with him and he throws the ball to a bunch of different receivers.”

The receiving corps has five different options in the shotgun, no-huddle offense.

Levi Morris had 133 yards on five catches and Burnside has nine receptions for 91 yards. Rausch also had 146 yards on 18 carries.

“They have decent size up front. They run that offense all the time so they know how to block it and to adjust to defenses,” said Lutz.

Fairbanks uses a 4-3 alignment on defense but will mix up their looks.

Harms is one tackle with Jarrod Quimby (6-3, 270) and Williams the other tackle. Liszeski and Barton are the ends. Liszeski leads the team with five sacks and Barton has three.

Jon Hackney (6-0, 205) is the middle linebacker and is flanked by Kutz — the team’s leading tackler — on one side while Burnside and Ryan Riddle (5-11, 175) sharing duties on the other side.

Morris and Replogle are the corners while Phillip Gibson (6-0, 155) and Nick Gibson are the safeties. Nick Gibson has five interceptions.

“They’re not real big, but they’re quick and they have pretty good speed. They like to swarm to the football. Their secondary is very athletic,” said Lutz.

The game will have huge playoff implications.

Fairbanks (7-1) is looking to make the postseason playoffs. A win over Ironton would solidify their goal. The Panthers were 7-3 last year but failed to qualify for the postseason.

Ironton (6-2) can clinch a home playoff game with a win over the Panthers. Friday’s game will be Senior Night.