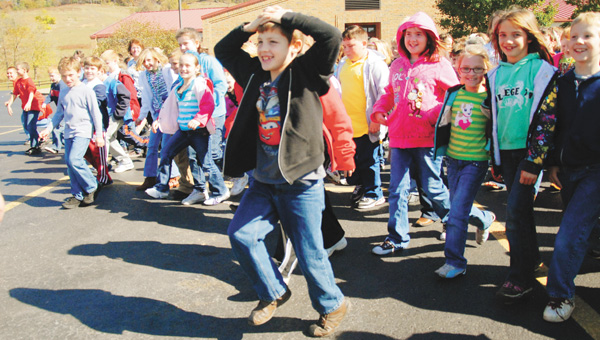 Boggs spoke to approximately 350 preschool students through fifth graders at the school, sharing the dos and don’ts of riding the bus.

“If you can’t see the school bus driver, he can’t see you either,” Boggs said to the students. He stressed the bus safety zone, telling students to stay within 10 giant steps of the bus when walking around it.

Boggs had the students practice taking their 10 steps to demonstrate the correct amount of space to leave between themselves and the bus.

Teddy Trooper showed the students why it is necessary to hold backpacks with their left hands, so that they can hold the railing with their right hands when entering the bus.

Other tips Boggs shared were keeping backpacks in the students’ laps rather than in the aisles, the importance of listening to the bus driver and getting to the bus stop five minutes early.

With the older grades, Boggs helped the students understand some consequences of some actions.

“Don’t throw things out of the school bus,” he said. “If it hits something like a car and damages something, you’re liable. That means your parents have to pay.”

“We can’t stress enough about school bus safety with children,” he said. “We’re lucky to not have many accidents with busses and children loading or unloading.”

Tamra Pinkerman, a fourth-grade teacher, said the students were excited about the day and she thinks it is very important to have the yearly bus safety demonstration.

“None of our kids are able to walk to school, and 90 percent ride the bus routes,” she said. “It’s very important.”

Spring Ross, a second-grader, said she is always careful when riding the bus.

“I learned to not step right in front of the bus and to let the bus driver know if you drop anything,” she said.

Uriah Cade, a fourth-grader, said he was excited about Boggs being at the school because he knows a couple of troopers, and he learned some new things as well.

“I didn’t really know you’re supposed to keep your book bag on your left arm,” he said.

Mary Jo Vermilyea, of Ironton, is familiar with the struggles servicemen and women face each day while they are serving... read more