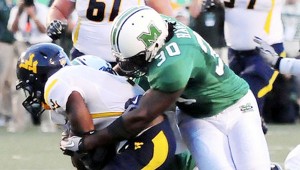 GREENVILLE, N.C. — Dominique Davis stuck with East Carolina through a coaching change, paid his own way to town to watch spring drills and took a summertime crash course to learn a foreign offense.

No wonder nobody saw this coming: The fleet-footed former starter at Boston College has the best numbers in pass-happy Conference USA.

A league known for its wide-open offenses has a new — but not unfamilar — name atop its stat columns. Taking over that mantle from injured record-setter Case Keenum of Houston, Davis leads C-USA with averages of 302 1/2 yards passing and nearly 318 total yards.

Yet the way Davis explains his success, his job is one of the easiest on the team.

“It’s not for me — it’s for the playmakers at the receiver position,” Davis said. “My job is really just to get the ball in their hands, the receivers and running backs, and watch them do the rest of the work.”

The junior certainly has made it look easy so far.

In just a few months on campus, he’s quickly learned the big-yards, big-points system that first-year coach Ruffin McNeill and offensive coordinator Lincoln Riley brought from Texas Tech. That has helped turn what many chalked up as an adjustment year into one to remember in Greenville.

The Pirates (4-2) enter this week’s matchup with struggling Marshall at 3-0 in C-USA play for the first time since 2001. They’re coming off their first victory over hated instate rival North Carolina State since 2006. And they seem to have the look of a serious contender for their third straight league title, in large part because of their new quarterback’s poise.

Riley points out that, for all of the hoopla that surrounds his scheme, “it’s not that complicated; a lot of it’s common sense.

“It’s not rocket science — it’s still football — but (Davis’ grasp of it) is impressive. I’ve got to admit, that was the one thing I was worried about him,” the coordinator said. “He never gets rattled. You can’t rattle him, and that’s served him well. He’s not as good as he can be, by any means, but where he is this early, it is impressive.”

Davis’ best attribute might be how quickly he recognizes open receivers and gets them the ball in places where they can make things happen. Opponents sack him only 1.3 times per game, and three of his teammates rank among C-USA’s top 10 receivers.

“He gets the ball into the right people’s hands. He gets the ball out of his hands quickly,” Marshall coach Doc Holliday said. “People say that they like to get after him, but not too many people have been able to get to him.”

The downside, Riley said, is that sometimes he’s inconsistent in his reads and winds up with interceptions. He’s been picked off nine times, but threw none last week during a near-perfect decision-making day against the Wolfpack, Riley said.

Until about nine months ago, Davis figured he’d be operating an offense drawn up by Skip Holtz.

Davis was BC’s first-stringer as a redshirt freshman in 2008 but ended up on academic suspension and decided to transfer. He landed at a junior college in Kansas and signed with East Carolina last December.

When Holtz left a month later for South Florida and McNeill replaced him, one of the first stops made by the new coach and the 27-year-old offensive coordinator was at Davis’ Florida home.

“The look in (Davis’) eye, I knew he was serious about it,” McNeill said. “He was very attentive, and that’s probably an understatement. He was leaning in his chair toward us and really didn’t say much, but was soaking it in, every word.”

Said Davis of that meeting: “I looked the man in the eye and told him, ’I made my mistakes, but that’s not me. That’s another guy. I’m going to come here and be a whole different man and be a leader for this team.”’

He certainly has been.

He didn’t enroll in time for the spring semester, so he paid his own way to campus and attended each of the Pirates’ 15 spring practices. He spent countless hours during the summer working out and studying enough film to beat out Brad Wornick and Rio Johnson for the job. The competition was so tight that nobody on the outside knew who’d start the opener against Tulsa until Davis trotted out with the offense for the first drive.

But his last drive is what really had everyone buzzing. Davis flung a 33-yard touchdown pass to Justin Jones as time expired to seal a 51-49 win and deliver one of the greatest finishes in program history. He’s since delivered two more 300-yard performances.

“Hard work equals success,” he said. “I just came out every day … and worked my butt off. I knew something good was going to come out of it.”

The Associated Press COLUMBUS — For the past year, Ohio State’s players have said they couldn’t wait to play Purdue,... read more