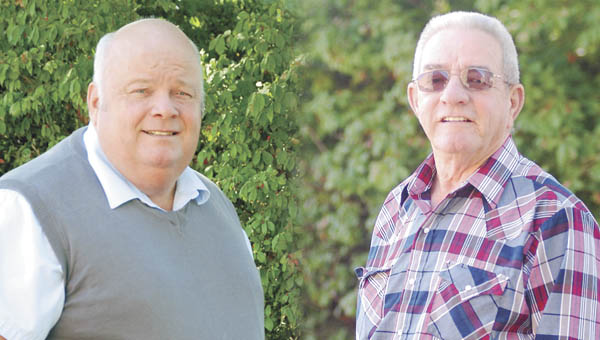 It will be a rematch for two veteran politicians when incumbent Lawrence County Commissioner Doug Malone vies for his third term facing off against former commissioner Paul Herrell in the Nov. 2, general election.

Herrell was going for his second term on the commission in 2002 when he was beaten by the Democrat Malone, then seeking his first time on the body. Now the Republican wants his seat back.

“I just love politics and I love Lawrence County and I think there needs to be more effort towards jobs,” Herrell said on why he is running again. “Jobs are the big thing in Lawrence County. I intend to work hard at it.”

Malone wants back on commission to continue his record as a strong fiscal manager and supporter of economic development.

“It’s fiscal responsibility, to make sure everybody stays within their budget,” he said. “I think in the tough times we have had, the commission has done an excellent job with the officeholders. … I’ve seen times when (the commissioners) would ask them to hold their spending down and they spent more. That’s when they put on the 1 percent sales tax.”

Malone cites the expansions of McGinnis, Inc., at South Point and Liebert in Ironton as well as the proposed St. Mary’s Medical Center campus on State Route 141 as commission success stories.

“I am very proud of the work done on that,” Malone said about the St. Mary’s venture. “I would like to see that be very successful. That way we can look forward to a small hospital. It won’t be in the next four years, but the push might be there. … And once The Point gets finished with its work, if it is not going to be the premier industrial park in the state, it will be one of the top in the state.”

Malone, who is currently a freelance sales rep for Western Southern Life, got into politics as the Perry Township clerk, a post he held for four years before serving 11 years as a Perry Township Trustee.

“A trustee was real good training,” he said. “It is a grass-roots government.”

Herrell, a self-employed farmer and former Symmes Valley and Lawrence County school board member, wants to see the county hire a full-time grant writer to help with projects.

“When I was in there before, we furnished several people with water through grants,” he said. “There are still people out there without water, don’t have sewer. It is time we do that. Get a grant writer. Keep a grant writer on full-time.”

If elected, Herrell said he would interview area companies to determine their job needs.

“I am going to move around to these companies and see what they need,” Herrell said. “Jobs is the big thing and to get some kind of industry. It has not been right since (Dayton) Malleable went out. If they have a place of business, we need to be there to help them.”

Unhappy with proposed pay, benefits cuts It was dissatisfaction with proposed salary and benefit cuts that made Eric Kuhn resign... read more