COSI rolls in for another year 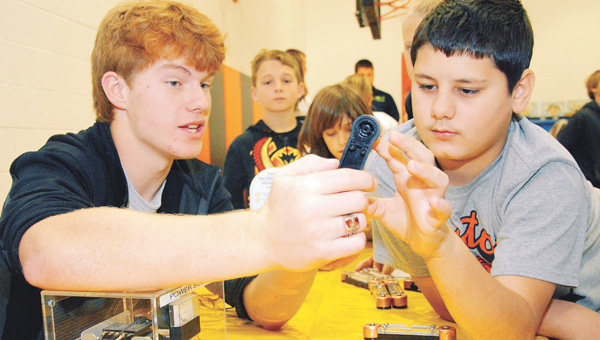 Volunteer Schylar Fields shows 11-year-old Austin Hay how to complete a circuit during a visit from COSI at Ironton Elementary School. THE TRIBUNE/JESSICA ST. JAMES

Did you know that for every gallon of gas used in an automobile, 40 pounds of pollution is put into the air?

Or that a potato is an excellent conductor of electricity?

How about the difference between potential and kinetic energy?

These are some of the things that Ironton Elementary students learned on Friday at the COSI on Wheels science outreach fair.

The Columbus-based Center of Science and Industry made another appearance at the school this year thanks to sponsor Dow Chemical.

“They have partnered with us for the last few years to bring these hands-on activities to the students,” said Linda Gagai, Ironton High School Science Club advisor. “We couldn’t do it without their contribution.”

In the past, COSI has brought hands-on science activities for the elementary students to learn about agriculture and chemistry. This year’s focus was on energy.

With the help of Jordan Rader from COSI and 21 science club volunteers from IHS, students in grades 3-5 were able to experiment with different kinds of energy and see how it is produced and how it is used in our everyday lives. They were also able to see energy’s effects, good and bad, on the environment.

There were 10 different activity tables that the students were able to experiment with.

At one station, students could test the affects on sound on water, wood and the air. Science club volunteers Shannon Walker, a junior at IHS, and Maggie Thomas, a freshman, showed the children how the use a tuning fork to make sounds. The children could feel the vibrations through a block of wood, watch the vibrations in the air make grains of rice bounce around and even make ripples in water.

Fourth grader Kayla Lorton said of the experiment, “It’s cool!” She touched the vibrating tuning fork to her hand, giggled and said, “It feels weird.”

The student were able to lay the Legos out on the various routes to see how much gas was needed to get there, as well as how much pollution was put into the air.

“If you use a hybrid car, it puts out less pollution,” said fourth grader, Ruthie Paholsky, as she set out her green Legos.

A station on how to collect energy through water allowed the children to race different shaped paddles. They could pick the shape of the paddles and build them themselves. The paddles came in different sizes with different surface areas, and some even had holes. The children decided which paddle would turn faster through the water and raise a small bucket off of the floor.

Dean Bruce said, “I like it.” The fourth grader said that was his favorite activity and that he liked science.

Another station allowed the children to hand crank a generator to see how brightly they could light an incandescent bulb and a compact, fluorescent bulb. According to the experiment, it took six times less energy to get the fluorescent bulb to light up.

The experiments, which were all hands-on, will help the students be more prepared for their state testing.

“It correlates with the state standards with these grade levels,” said Gagai. She said that COSI uses age appropriate experiments so they will be ready for their first standardized state science testing in the fifth grade.

“They can see that science is fun,” she said. “And hopefully we can enforce the things that are being taught in the classroom.”

Fifth grade math teacher, Susan Morgan, said, “When they get to see things and do, it makes much more of an impression.”

Morgan said that the children get to participate in smaller groups, which allows each child to have a turn at the various experiments.

“They’re always excited about this,” she said. “Every year it’s different.”

Superintendent of Ironton schools, Dean Nance, said he was glad that COSI travels to schools to make it possible to encourage kids to learn outside of the classroom. He also said that he is proud of his science department.

“I’m tickled to death with our science department and what they are doing to raise the bar,” he said. “The team of science teachers we have here are second to none.”

Lawrence County voters will decide if Collins Career Center will be able to increase the size of its building in... read more