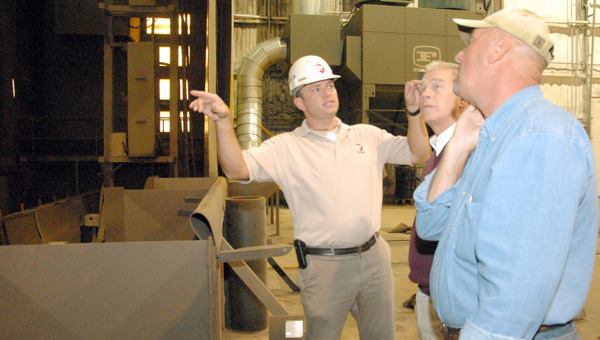 Strickland toured McGinnis Inc Saturday afternoon on his way through a series of visits that started in Marietta and ended with the Governor’s Southern Ohio Ball at Shawnee State University in Portsmouth.

The governor met with owners from the company, a barge manufacturing and repair business that recently unveiled a $35 million expansion.

The company is the only one of its kind in the country that has attempted to service the barges in an environmentally safe way, Rob Lynch, lead project manager for McGinnis, said. Instead of painting the barges outside and allowing dust to get into the air, McGinnis services them all in facility. The company also a boasts timeliness- a barge can be blasted, painted and back on the water within 30 hours, Lynch said.

“This is the kind of economic development that will give Ohio the edge,” Strickland said. “This will create jobs in the future.”

Strickland is running against Republican John Kasich for re-election.

At a little over a week away from the election, Strickland said his internal polls predict that he is a few points ahead of Kasich.

“I think we’re going to pull it off but it’s going to be very close,” he said.

Strickland, who traveled in a RV labeled “Sportsmen for Strickland” added that the National Rifle Association endorses him while his opponent received an “F” rating from the association. He also said he supports the Appalachian Regional Commission and that his opponent does not support it.

“It’s important for the people of this part of Ohio to stand up for themselves and support the person who stood up for them,” Strickland said.