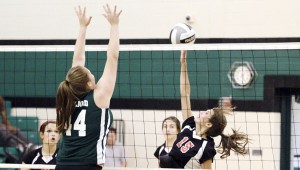 Coal Grove’s Ashley Adkins (15) goes for a kill at the net. (The Ironton Tribune / Courtesy Joe Stevens of FJSPhoto.com)

PROCTORVILLE — The Coal Grove Lady Hornets gave it all they had, and then some.

The Lady Hornets turned in strong effort the entire volleyball game as they beat the Fairland Lady Dragons in four sets 22-25, 29-27, 25-21 and 25-16 to win the Division III sectional tournament on Saturday.

“When I asked my girls to come out and give 125 percent, they did just that,” said Lady Hornets’ coach Trisha Damron. “In the regular season we struggled against Fairland, but my girls just wanted it more.”

Bailey Harrison had a career-high of 30 points for the game with Gabbie Carpenter and Hailey Johnson added 14 each.

Johnson also had 15 kills and Marissa Stevens accounted for 45 assists.

Coal Grove will play No. 1 seed Adena at 6 p.m. Tuesday at Athens High School in the district semifinals.

“I have a young team this year with Stevens being the only senior, so I am really excited for the young girls to get the opportunity to play at districts,” said Damron.

“The majority of my team consists of sophomores. This will only make them better in years to come. I am very proud of the hard work they have put in and I am sure it will show come game time.”

The Associated Press COLUMBUS — Its season two-thirds of the way over, No. 10 Ohio State is setting its sights... read more