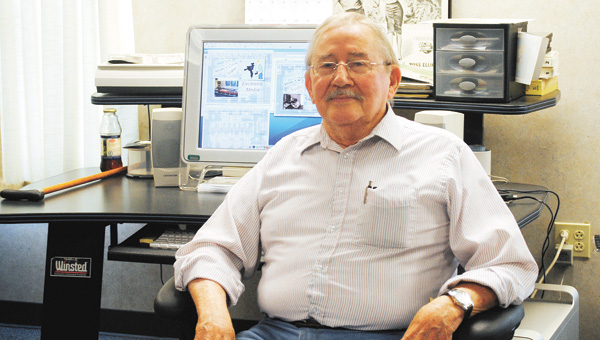 For Norm Beebe, retirement has never been about taking it easy, and the staff and students at Ohio University Southern campus are very glad about that.

Beebe, 89, has been a volunteer in the electronic media department at OUS for the past 18 years. It all started when Don Moore, assistant professor and director of electronic media, came up with the plan for a new television program for the university’s community access channel.

“Don put an ad in the paper for a class of seniors to do a show on the air,” said Beebe, who had retired after 35 years as a chemical engineer. “I saw it in the paper and decided to try it out. I liked it. After a couple of shows, putting it on, I decided I wanted to find out about all of it.”

Moore said there were eight volunteers for the show called “Senior Happenings,” which covered topics of interests to seniors, like investing, banking and cooking, to name a few.

“I started on the cameras, then in front of them, and then I started making it,” Beebe said. “I learned to edit, and I could take a show from beginning to end and put it on the air.”

While “Senior Happenings” has since ended, that didn’t stop Beebe. He is still there at OUS three days a week, like clockwork, helping the electronic media program wherever he can.

“He started volunteering and has been with me ever since,” Moore said. “He helps with graphic design right now and he assists students. One student called him the ‘floor general.’ As long as he’s around, everyone stays in step.”

“Anytime we would get a new piece of technology, he would get the box and go, ‘Ooohhh!’” Moore said.

Beebe said the reason he keeps volunteering is that he still loves learning.

Beebe said the people at OUS are like family to him, and Moore feels the same way about Beebe.

“He is a great mentor too, not only to the students, but to the faculty as well,” Moore said.

“They’ll ask, ‘Hey Norm, what do you think about that situation?’ and he puts it in perspective.”

Beebe said the staff has been there for him during some tough situations as well.

“Four years ago, my wife passed away,” Beebe said. “After a few weeks, they said, ‘Get down here. That’s enough grieving.’

Beebe had been married for 61 years, and he was struggling with her death.

“It was hard on me. I was beating myself up,” he said. “They made it easier to come back.”

Beebe joked that for 18 years, OUS has added a zero each year at the end of his pay as a raise.

“I’m trying to convince them to put a one in front of it,” Beebe laughed.

“Norm will show them how to do cameras or software. He jumps in and rolls his sleeves up,” Donley said. “A lot of times he works circles around them.”

Andrew Heaberlin, 23, from Greenup County, Ky., a former OUS student, is one of the many students who think of Beebe as more than just a volunteer.

“Norm is one of the better friends that I have,” Heaberlin said. “He is just a good guy.”

Heaberlin said one of the many things Beebe shows is that growing old doesn’t mean growing obsolete.

Bill Dingus, executive director of the Lawrence County Chamber of Commerce and former dean of OUS, has fond memories of his time with Beebe at OUS.

“I sincerely appreciate him and his heartfelt commitment,” he said. “The type of character and value system that he showed the young students was phenomenal. He has always been such a giver, really positive, always smiling.”

“There is no finer role model for any of us than Norm Beebe,” Dingus said.

“Norm is the kind of person who lifts the spirits of everyone around him,” Willan said. “He’s positive about life. He’s interested in just about everything. He’s kind. Students just gravitate toward him and the faculty and staff as well.”

OUS recently honored Beebe for his 18 years of service. Willan, and many others, hopes he sticks around for a while longer.

Beebe said he has no plans of stopping any time soon.

The cause of fire in Chesapeake Monday evening has been ruled undetermined. According to information provided by Shane Cartmill, public... read more