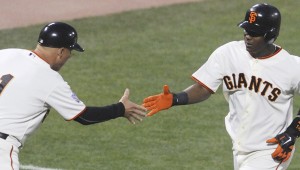 San Francisco Giants' Edgar Renteria is congratulated by the Giants third base coach after he hit a solo home run in the fifth inning against the Texas Rangers, for a 1-0 lead, in Game 2 of the World Series at AT&T Park in San Francisco Thursday. (JMCT DIRECT PHOTO)

SAN FRANCISCO — For a team that barely made it to the playoffs, the San Francisco Giants are looking more and more like a baseball juggernaut.

Matt Cain pitched 7 2-3 innings and combined with his bullpen on a four-hitter, Edgar Renteria reprised his October success with a home run and three RBIs, and San Francisco broke away for a 9-0 win Thursday night and a 2-0 Series lead.

“We’ve put ourselves in a good situation,” said Cain, who hasn’t allowed an earned run in the postseason. “We’ve just got to take that confidence and some of the good approaches that we’ve had into these last two games and take them down to Texas with us.”

Forty of the previous 51 teams to take a 2-0 lead have gone on to win the title, including seven straight and 13 of the last 14.

After a day off, the Series resumes for the first time in Arlington, Texas. Colby Lewis starts Game 3 for the Rangers on Saturday night against Jonathan Sanchez.

“I don’t think we caught any breaks yet,” Rangers manager Ron Washington said. “We certainly don’t feel like we’re defeated. We’re heading home. They took care of us in their ballpark, now we’re headed to ours.”

San Francisco improved to 11-0 against Texas at AT&T Park and got its third shutout in nine postseason wins. The Giants sent the high-octane Rangers offense to its first shutout since Sept. 23.

Not bad for a team that scored 19 runs in its six-game NL championship series win over Philadelphia.

By the ninth inning, giddy fans waving orange pompoms and scarves were chanting “Sweep! Sweep!” A four-game Series would end on a night for the Giants’ colors — Halloween.

“Unbelievable,” said Renteria, who has just eight regular-season homers in the last two years. “You guys know I have power.”

“We’re not playing the same,” said the Nelson Cruz, one of several slumping Rangers. “I don’t know what it is. I wish I could tell you. The way we’re playing, it’s different. It’s not us.”

“I think that more or less it has to do with the pitching we’ve been facing,” Washington said. “We had some opportunities early in the ballgame to put some runs on the board, and we had the right people up there, and he made his pitches.”

While the Giants had the best ERA in the majors during the regular season, they were just 17th in runs — the fewest among the eight postseason teams. Yet San Francisco has outscored Texas 20-7 and outhit the Rangers .314 to .227. The Giants’ offense if picking up speed faster than a cable car heading down Nob Hill.

“You take all the runs you can get,” Giants manager Bruce Bochy said.

Four straight two-out walks by Rangers relievers let the game out of control, and Texas set a record for most runs allowed in a franchise’s first two Series games — five more than Colorado did against Boston in 2007.

At this rate, team president and part-owner Nolan Ryan probably wants to grab a ball himself and get on the mound.

“It’s not going to bother us. We’re still confident we can win this thing,” said Derek Holland, who forced in a run with three straight walks.

Loser C.J. Wilson didn’t pitch badly, allowed two runs and three hits in six-plus innings. He gave up Renteria’s fifth-inning homer, then left the mound accompanied by a trainer with a blister on the middle finger of his pitching hand following a leadoff walk in the seventh. Juan Uribe added a run-scoring single against reliever Darren Oliver.

“This blister is something he’s been dealing with all year,” Washington said. “He’ll put some glue on it and do whatever he has to do to close it up.”

San Francisco pulled away as Washington again made bullpen moves too late, and the Giants became the first team in World Series history to score seven runs in an inning after two outs and the bases empty.

After Holland’s bases-loaded walk to Aubrey Huff, Mark Lowe walked Uribe. Renteria, whose 11th-inning single won Game 7 of the 1997 Series for Florida against Cleveland, followed with a two-run single. Pinch-hitter Aaron Rowand hit a two-run triple against Michael Kirkman, and Andres Torres doubled in a run.

Cain allowed all four hits, and has allowed only a single unearned run in 21 1-3 innings over three postseason starts. He joined the Giants’ Christy Mathewson (1905) and Carl Hubbell (1933), the Yankees’ Waite Hoyt (1921) and Detroit’s Kenny Rogers (2006) as the only pitchers to allow no unearned runs in 20 or more innings in a single postseason.

“I think it’s a little bit of everything,” Cain said. “Buster’s doing a great job of putting down the right fingers. He’s been calling the right pitches.”

Javier Lopez and Guillermo Mota finished. San Francisco has a 2.64 ERA in the postseason with 109 strikeouts in 109 innings — and just 35 walks.

Now the Giants have to keep it up on the road.

“Now we’re going in their ballpark,” Bochy said. “I’m sure they’re going to have a sense of confidence. We’ve been road warriors, so that’s what it’s going to take right now.”

Texas had a chance to get ahead when Ian Kinsler drove an 0-2 pitch leading off the fifth to deep center. The ball hit flush off the top of the fence, just to the left of the 399-foot sign, bounded up and was caught by Torres, who held him to a double.

“I thought it was a home run,” Cain said.

“A lot of times they do bounce out,” Bochy said. “But we got a break there.”

Renteria led off the bottom half by pulling an 0-1 pitch at the letters down the left-field line, where it landed about eight rows deep, next to an alleyway. Renteria had gone 53 straight at-bats without a home run since connecting off the Los Angeles Dodgers’ Ted Lilly on Sept. 4 and had not homered at AT&T Park since July 27 against Florida’s Brian Sanches.

All the bounces have gone the Giants’ way

“I don’t think we caught any breaks yet,” Washington said. “We certainly don’t feel like we’re defeated. We’re heading home. They took care of us in their ballpark, now we’re headed to ours.”

NOTES: Former 49ers QB Joe Montana was at the game and was shown on the videoboard, as was Journey’s Steve Perry… The ceremonial first pitch was thrown out by Megan Armstrong and Nancy Mitchell, daughters of Bobby Thomson, who died in August. Thomson’s Shot Heard Round the World won the 1951 NL pennant for the New York Giants over the Brooklyn Dodgers. … Texas hadn’t forced in two runs in an inning with bases-loaded walks since Rich Harden did it on April 7 against Toronto, according to STATS LLC. … Elvis Andrus and Cruz failed to get hits, stopping their 12-game postseason hitting streak.