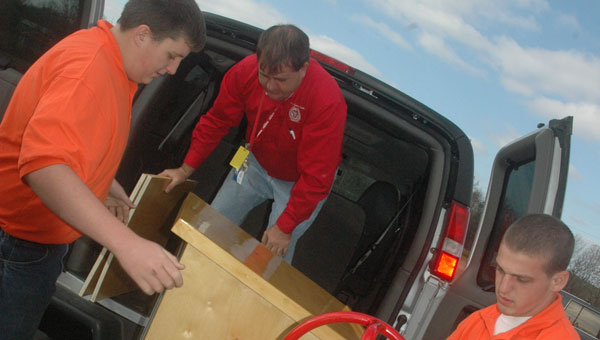 Jarred Brown and Joe McMaster help their teacher, Matt Parnell, move a podium into the new Ohio State Highway Patrol Post Friday morning. Their carpentry class at Collins Career Center made the birch and poplar podium for the community room at the new OSHP headquarters. — The Tribune/Benita Heath

SOUTH POINT — The new multi-million dollar headquarters for the Ironton Post of the Ohio State Highway Patrol may not be open yet. But already the patrol’s new home near the South Point High School has its first piece of furniture, thanks to the expertise of the carpentry students at the Collins Career Center.

Friday students from the school delivered a birch and poplar podium where it was placed in what will be the community room of the new facility.

The gift came about after Lt. Michael Gore of the highway patrol contacted Jim Howard, principal at Collins Career, to see if the carpentry class could come up with something for the new headquarters.

“I wanted to have something from the local school to tie us even more to the local community,” Gore said.

The community room will be available to the public for use such as by the emergency planning agency and the schools.

The headquarters has approximately 6,000 square feet of space, compared to the current facility that is only a 1,700-square-foot structure.

When the post took over its present headquarters off Delta Lane in the 1980s, there were only seven troopers attached. Now there are 11 troopers, four sergeants, the commander, a secretary and a maintenance man.

Besides the meeting room there is also a three-bay garage, a greeting room and larger locker rooms and office space. The post expects to move into its new location in late November.

‘Fall’ in love with the Tri-State