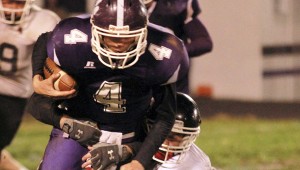 CHESAPEAKE — The Chesapeake Panthers completed the turn around after starting the season 0-5 and finishing 5-0 in conference play to claim the Ohio Valley Conference championship and the Little Brown Jug with a 25-22 win over the Coal Grove Hornets.

“We told the kids that I did not think there was anybody around that could go through what we went through starting 0-5, not quit, and even have a shot at a conference championship,” Chesapeake head coach Phil Davis said.

“Coal Grove has a great team, I am really proud of our kids, and I think the game was as close as the score ended up.”

Entering the fourth quarter, the Hornets held the lead at 14-13 but were forced to punt. On the second play of the possession, Nate Jones gashed the Hornets defense for a 47-yard touchdown. The two-point try was no good, and the score was 19-14 with 9:02 to go.

Jones paced the Panthers with 134 yards on 11 carries with two touchdowns, and gave credit to the lineman for his success.

“The line cleared out a hole, and after one cut I was able to get in the open field. I cannot thank them enough,” Chesapeake running back Nate Jones said. “This is what you work for all year and I am so excited, and this is the best feeling you can have.”

After a Coal Grove punt, the Hornets defense forced a fumble and recovered at the Chesapeake 20 yard line. Four plays later, Bubba Wood found the end zone from one yard out. Boo Woods added the two-point run to move Coal Grove back in front 22-19 with 7:28 to go in the game. Wood finished the game with 32 yards on nine carries with two touchdowns.

After both teams traded punts on their next possessions, Chesapeake took over at midfield with 2:02 showing on the clock. On first down, McMaster found Patrick Hintz for a gain of 14, and then found Tommy Noble for a gain of 9.

On second and one, McMaster dropped back to pass and was close to being sacked by a Coal Grove defender who had his jersey and was dragging him to the ground. However, just before going down, McMaster threw the ball back towards the middle of the field.

Initially, the referee threw a flag for intentional grounding. However, after discussions between officials the flag was waived off as they ruled a receiver was close enough to the pass attempt.

Two plays later, McMaster found Dylan Nichols for a gain of 17 down to the Hornets six. After another two plays, McMaster took an option play and ran 5 yards for the score. The extra point was no good, and the score was 25-22 with 45 seconds to go.

Goal Grove (8-2, 4-1) tried a lateral and pass when quarterback Alex Bare threw behind the line to Bryan Steele who then attempted a pass down field. But Chesapeake’s Brandon Noble intercepted the pass to seal the victory.

“I thought both teams played really well, and it is just unfortunate the way it happened at the end,” Coal Grove head coach Dave Lucas said.

“I knew (running the ball) was going to be difficult because I told our team all week that (Chesapeake) was an improved team. But I am proud of our kids and they played hard tonight, and played good football all year long.”

Chesapeake got on the board first when Trey West found the end zone from 1-yard out. Jacob Wells kicked the extra point, and the score was 7-0 with 3:54 to go in the first. The drive covered 49 yards in 14 plays and took 6:02 off the first quarter clock.

Coal Grove answered right back on their next possession going 59 yards in seven plays capped off by a Bubba Wood 1-yard run. The two-point try was no good and the score at the end of the first quarter was 7-6.

After both teams traded punts throughout the second quarter, Bare found his rhythm and the Hornets marched 82 yards in seven plays. Bare capped off the drive with a quarterback keeper from 5 yards out. Boo Woods ran in the two-point conversion and Coal Grove led 14-7 at the half.

Bare finished the game 7 of 15 passing for 124 yards and two interceptions.

On the opening possession of the second half, the Panthers faced a punting situation. However, a fake punt allowed the Chesapeake drive to continue and three plays later Jones found a crease and raced 43 yards for a touchdown and it was 14-13.

McMaster was involved in all three offensive aspects for the Panthers. He was 4 of 8 passing for 41 yards, rushed four times for 23 yards with a touchdown, and caught one pass for 24 yards. West added 50 yards on 11 carries with a score.

Coal Grove was led by Woods who had 66 yards on 16 carries. Bryan Steele and Shawn Morrison both caught three passes for 61 and 40 yards, respectively.

The Panthers limited the potent Coal Grove rushing attack to only 100 yards for the game.

Coal Grove will probably play at Oak Hill on Saturday in a rematch of last season’s first round game.

Ironton running back Tyler Hager (30) races into the end zone as he score one of his five touchdowns in... read more