Encounters of the paranormal kind 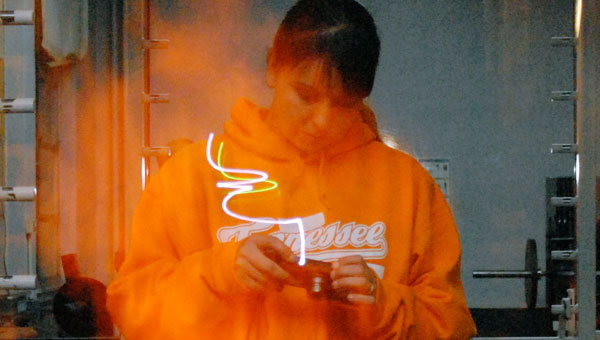 Tracy Jones checks over her images hoping to have captured something paranormal inside one of the weight rooms at the Chesapeake Community Center during a ghost hunt. THE TRIBUNE/JESSICA ST. JAMES

The sounds of footsteps in an empty hall. Strange figures making shadows behind doors. Dark apparitions caught on videotape. A mysterious blonde girl in a blue dress.

These are some of the unexplained phenomena that brought paranormal investigators to the Chesapeake Community Center on Route 7.

For the past two weekends, PRIOV or Paranormal Research and Investigations of the Ohio Valley and Quest Paranormal Investigations hosted their second annual All Hallow’s Eve Ghost Hunt to investigate the happenings at the center, while also raising money for ongoing capital improvement projects to the center and other local charities.

“In all the years I’ve done this, all the places I’ve gone, this is hands down the most active place for phenomena,” said David Maynard, founder of Quest Paranormal.

Maynard, who said he has had a lifelong interest in the paranormal, began investigating the center back in March of 2009 and has done about a dozen investigations there, some jointly with PRIOV.

“We’ve got some decent evidence. We’ve never had anything not happen here,” he said.

Maynard said he has also been called to investigate several private residences, historical sites and businesses. He also has a theory on why there is so much paranormal activity in the area.

“Personally, my own theory on that is that energy is being pulled from that river. That is a huge source of power right there. I think it probably follows the length of the river.”

The four-night investigation of the center brought people from all over the Tri-State. Each session lasted from 10 p.m. to 2 a.m. There were only allowed a maximum of 24 participants at each session to keep the groups small.

Before the participants were split into small groups for the ghost hunt, Maynard and his main researcher Dreama Jackson gave some history on the building and of the happenings and sightings.

According to Jackson’s research, the center was a building originally built by the Ku Klux Klan called the Fraternal Hall Building.

“There is also a tunnel going from the building under Route 7 so its members could sneak in and not be seen,” she said.

She also said that slaves were held there when they were caught, and that most of them didn’t make it out alive.

Jackson explaied that the building was turned into a one-room schoolhouse called East School, in 1921, with additions added on in 1948. The building has been used as the Chesapeake Community Center for the past 21 years.

Maynard described some of the happenings.

“I don’t really want to name names of the people we think are haunting the place simply out of respect for the family members that are still alive. But we know of at least two entities that are here,” he said.

One of the entities is a dark, shadowy male figure, which Maynard said he has caught on videotape, which he played for the group. He said he believed that it could be a janitor that worked there that died.

Founder and lead investigator of PRIOV, Bill Sawyers said, “There’s supposed to be a little girl that haunts the building. We caught her on video last year.”

They described this blonde girl as being about the age of 12, with long, curly blonde hair in a blue dress.

Maynard’s assistant, Nathan Carter, described an incident from the first two nights of the investigation.

“Two of my friends are actually victims of a physical experience with the paranormal, he said.” My friend, her hair was pulled downstairs in the locker room. And my other friend was lightly scratched on the arm.

He also said that during an investigation, they try to communicate with whatever may be there with them, and to try and get the entity to make its presence known. He also said that not every thing you hear on a ghost hunt is paranormal.

“A good rule of thumb whenever you’re ghost hunting is to believe that about half the stuff that you think is going on is just in your head. That’s the way I look at it. Your mind plays a lot of tricks on you.”

The investigation led participants into the depths of the community center’s boiler room, abandoned locker rooms, and a long, second floor hallway.

Quest Paranormal and PRIOV members led the investigation by asking any entities present to give them a sign of their presence. Participants stared into the darkness and waited for an answer, a sign.

Quest member Mike Delong told of strange happenings on the second floor of the center. He led a group to room 15, where a strange shadowy figure had been seen through the crack at the bottom of the door. He also showed the group where a dark silhouette has been seen passing behind a door at the end of the hall.

There was no activity that particular night in that hallway but Delong said, “Unfortunately, you can’t just call them up and say, ‘I’m coming, be active.’”

In the basement, the old girls’ locker room, with only the light of small flashlights, a group tried to call to the entity that they believe was responsible for the hair-pulling on previous nights.

“I felt a presence down in the basement,” said Chris Perkins, a participant from Ashland, Ky.

His wife, Cassie, said, “It was the feeling like there was someone standing behind you.”

The two said they had been on previous ghost hunts in the past, but this was their first time at the community center.

“I didn’t know the place was really haunted myself. I grew up in Chesapeake originally,” said Chris.

Another participant, Kyle Crump of Chesapeake, said he knew the center had a haunted history, and even experienced some unexplained happenings in the past. Crump has worked for the Southeast Ohio Emergency Medical Services in Chesapeake for 18 years and remembers when they used the center for an interim EMS center after their trailer flooded in 1998.

“That room at the end of the hall served as our interim EMS station for four years while they built our new station,” Crump said. “Everyone there reported a lot of activity. You would hear, because we were there 24 hours a day, footsteps all up and down the hall. You could hear everything around you.”

Crump also said he attended junior high in that building.

“I think it’s neat. As a kid, the downstairs was just so creepy. It’s kind of neat to get a chance to actually check them out to see if there was actually a reason why you were creeped out,” he said.

Many noises were heard and shadows were seen at the Chesapeake Community Center ghost hunt. Some were explained, whiles others were not. The members from Quest Paranormal and PRIOV both feel confident that paranormal activity has been confirmed there.

But, as Maynard said before, “In this field there are no concrete absolutes.”

PRIOV founder Sawyers said he hopes that people will come forward with their paranormal experiences if they feel they need help with happenings in their homes.

“They can’t call 911 for paranormal activity,” he said. “(Maynard and I) want them to be able to call us, and us give them, one of us, it doesn’t matter, the help that they deserve.”