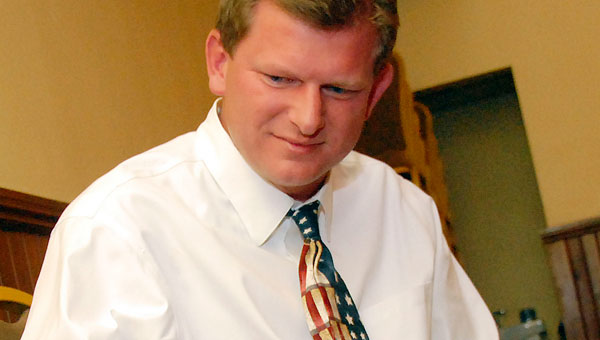 It was only 9 p.m. Tuesday when the text messages into Jason Stephens’ cell phone were giving him the words he had worked for over the past few months.

He would be the next Lawrence County Auditor.

With a salary of $70,830, auditor is the fourth highest paying job in the county.

Sitting on the steps at Austyn’s where he was entertaining supporters, he phoned in the news to Ray “Moose” Dutey, current county auditor.

“I’m following in your footsteps,” he told Dutey as friends and family celebrated nearby.

From the first precinct counts, Stephens, a Lawrence County Commissioner, was ahead of Stephen Dale Burcham, county treasurer, with vote totals of 3,315 to 3,073. At the half way mark of precincts counted, Stephens inched slightly ahead with 53.8 percent of the votes cast.

It was the first time the two county officials had ever faced off. Stephens has won every election as county commissioner since his first race in 2002. Burcham is in his second term as county treasurer. Neither man had ever lost an election.

“I just want to thank the volunteers and workers,” Stephens said. “We had an enormous amount of support. I’m really pleased with the results, that they have entrusted me with this new position.”

Burcham waited out the results in his office on the second floor of the courthouse with family and associates. He had campaigned on putting financial records on the Internet and switching the county from its current cash basis financial reporting to the general accepted accounting principles for government entities. Currently the county is fined annually $750 for its way of reporting.

“I appreciate all those who worked for me and those who supported me and voted for me,” Burcham said. “Tomorrow is a new day and we will be back at the treasurer’s office and work as hard as the day before.”

The Ohio Constitution mandates the auditor takes office in March. That means Stephens stays on the county commission until then. After he takes over as auditor the Republican Party Central Committee will choose his successor. That appointee will hold the post for about 20 months.

“It’s been a good night for us,” said Dutey, who is also head of the Republican party. “I think the economy was the main thing (for the party wins), The economy and Obamacare. I think people are tired of seeing the spending and raising the national debt and want to get back to the more conservative. I was surprised about Bill Johnson and Charlie Wilson. That shows people are dissatisfied. Now we have to serve the people and give them good government.”