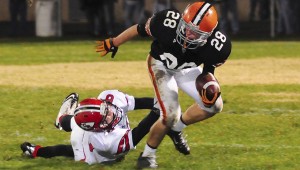 Ironton Fighting Tigers' running back Tres Wilks runs out of a tackle by a Coshocton defender during a 32-12 playoff romp Friday. (The Ironton Tribune / Tony Shotsky of Southern Ohio Sports Photos)

Ironton used its ground game to pound out a 32-12 win over the Coshocton Redskins Friday at Tanks Memorial Stadium in the Division IV Region 15 quarterfinals.

Ironton (9-2) racked up 377 yards on the ground while limiting the Coshocton potent ground game to a mere 115 yards.

Redskins’ fullback Zach Shaw — who ran for more than 1,000 yards on the season — gained 30 yards on seven carries.

Coshocton (8-3) gained 51 yards in the fourth quarter against the Ironton second unit. Quarterback Brody Philabaum was just 3 of 11 passing for 4 yards and an interception.

The Fighting Tigers will play Sparta Highland next Friday in the regional semifinals at a site to be determined.

Ball threw for 267 yards and three touchdowns while running for 269 yards and four scores. The Hornets (8-3) had 566 total yards of offense.

Symmes Valley (9-2) trailed just 7-0 at the end of the first quarter but was outscored 27-7 in the second quarter.

The Vikings were led by Evan Herrell with 121 yards rushing on 15 carries and he also caught a pass for 30 yards and threw a pass for 10 yards. Quarterback Cody Myers ran for 79 yards and was 2 of 7 passing for 48 yards and a touchdown.

Daylight saving time ends this weekend, and while it means it’s time to set clocks back an hour, it’s important... read more