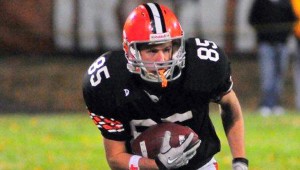 The next stop is a familiar site: Logan High School.

Although Ironton left the SEOAL this year, the Fighting Tigers played at Logan’s artificial surface stadium two years ago.

Not only is Ironton familiar with the Logan site, the Fighting Tigers also know a little about Highland. The two teams met in the first round of the playoffs last season at Tanks Memorial Stadium with Ironton winning 36-0.

The Scots (9-2) return five starters on defense and six on offense including Artie McAndrew who rushed for 164 yards and two touchdowns in last week’s 38-7 win over Portsmouth West.

Ironton opened the playoffs with a 32-12 win over Coshocton.