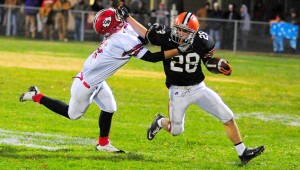 Uh-oh. Those run-oriented Ironton Fighting Tigers still like to run the ball, but they can throw it a little, too.

Although Ironton ran the ball 57 times for 342 yards and controlled the game, quarterback Tommy Waginger was 4 of 5 passing for 47 yards and a touchdown as the Fighting Tigers pounded the Coshocton Redskins 32-12 Friday in the Division IV Region 15 postseason playoffs.

“We wanted to control the line of scrimmage and run the ball, but we knew we needed to throw it a little. You have to keep the defense honest and we were able to do that,” said Ironton coach Bob Lutz.

Tyler Hager and Bryan Warner each rushed for 90 yards, Trevor White came off the bench to gain 82 yards and Tres Wilks had 52 yards rushing and caught three passes for 39 yards and a touchdown.

While Ironton’s offense was clicking, the defense was shutting down Coshocton’s potent attack. The Redskins (8-3) managed just 115 yards on the ground and a mere 3 yards through the air.

Fullback Zack Shaw — a 1,000-yard rusher on the season — finished with only 32 yards on seven attempts. Coshocton got 45 yards against the Ironton second team when it scored its final touchdown with under two minutes to play.

“The defense played well. I thought we played pretty well overall. We had some stupid penalties that we can’t have, but other than that we played well,” said Lutz.

“Their fullback is a pretty good runner and we didn’t want to let him hurt us and we pretty much did that.”

The Fighting Tigers beat Highland 36-0 last year in the first round of the playoffs.

It didn’t take long for Ironton to assert itself. After forcing a three-and-out, Ironton went 63 yards in 11 plays to score with Waginger and Wilks hooking up on a 16-yard scoring play.

A holding penalty pushed Coshocton back on its next series and then Waginger picked off a Brody Philabaum pass at the Redskins’ 30 and Ironton was back in business.

Wilks and Warner each ran for 8 yards to give Ironton a first down at the 3, but a penalty back the ball up and the Fighting Tigers eventually had to settle for a 22-yard field goal by Williams to make it 11-0.

The teams exchanged punts with Ironton pinned back at its own 7-yard line. But the Fighting Tigers just chewed up more than five minutes off the clock as they drove 93 yards in 13 plays — all on the ground — capped by Hager’s 3-yard run with 1:13 left in the half. Wilks’ conversion run made it 19-0.

A 15-yard penalty on the conversion plus an off-sides on the kickoff forced Ironton to kickoff from its own 20 and a 16-yard return put Coshocton at the Ironton 26.

Dylan Ogle tried an end round pass but got some heavy pressure. He then scrambled for 14 yards and two plays later plush a facemask penalty set up a 4-yard scoring pass from Philabaum to Shaw with just eight seconds left in the half and it was 19-8 at the break.

White had a 51-yard run in the opening drive of the second half to set up a 3-yard scoring by Wilks and it was 25-6.

Ironton’s second unit punched in a score as White went 3 yards for the touchdown to cap a 51-yard, seven-play drive.

COLUMBUS — From nowhere to Top 10. The Ironton Fighting Tigers’ cross country team began the season unranked and not... read more