Ready for winter? ODOT says it is 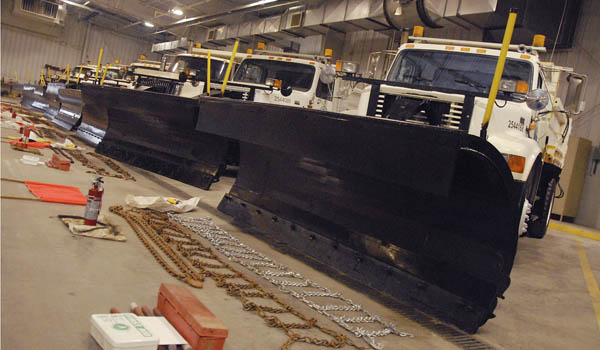 It won’t be long before the weather starts to turn cold. And when the snow starts to fly, the Ohio Department of Transportation will be ready.

At least that was the goal of a recent “Working for Winter” event at Lawrence County’s ODOT garage in Ironton.

ODOT officials were at the garage Friday to inspect its fleet of snowplows and salt spreaders to ensure they are ready to hit the road when the snowy weather arrives.

Similar events are held each year in all Ohio counties.

According to a report by the American Highway User’s Alliance, if the state’s transportation’s system were to shut down for one day during a winter storm, the total economic impact would be a $300 million loss due to direct and indirect productivity.

Besides inspecting the equipment, drivers also attended course about resources, technology, equipment and materials that will be used this winter. The drivers are taught to be adaptable to nature and to be ready to change gears if need be, Fuller said.

Rick Smith, information technologist for ODOT, was inspecting the radios on each of the salt trucks. The radios are important to the drivers, especially in areas where cell phones don’t work, Smith said.

“(There are) just some little problems,” Smith said about the radios. He added that the drivers check them regularly and report problems.

While the garage is readying itself for winter, Fuller also had some advice for local drivers this winter. She advised drivers to have a kit that includes their cell phone, a blanket, water and a snack and also to have a full tank of gas. She also said that drivers should allow themselves double the normal driving time to get to their destination if there’s snow or ice on the roads.

“What’s the worst that could happen? You’ll be there early,” Fuller said. “We want you safe.”

When the holidays roll around, most of us will be spending time with family and friends. With a log on... read more