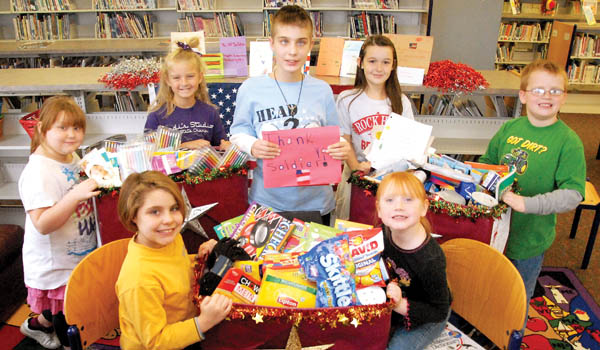 When the holidays roll around, most of us will be spending time with family and friends. With a log on the fire and a Christmas ham in the oven, the world will be at peace.

This past week, Rock Hill Elementary School students collected items for the men and women who make sure our world stays safe through their Family First Adopt-a-Soldier drive.

They began their donation drive on Nov. 1, collecting items for soldiers overseas who will not be able to be with their families this Christmas. The new Family First program at the school worked in conjunction with the Marine Corps Support Community Tri-State Chapter and its Operation Santa 2010 program.

Michelle Simpson, the new family liaison at Rock Hill said, “We have started a program called Family First and it’s a way to try and get parents more involved in education. We though giving to soldiers was so important. And I think that’s why it’s been such a huge turn out.”

Brownie Girl Scout Troop 959 also pitched in to donate and make cards for the soldiers.

Third grader and Girl Scout Allison Klaiber helped to make some of the cards.

Allison said she thought the Adopt-A-Soldier program is important because, “They are saving America and helping us be free.”

Even though the class with the most items collected in each grade level win an ice cream sundae party, the meaning and importance of the collection was in no way lost on the children.

Third grader, Adam Rhodes, donated many items to the drive. He said it was important to give to the soldiers, “So they can have lots of things to do whenever they’re off and so they can eat. And I also think that they should have some stuff because they fight for us so we didn’t have to, so we could safe.”

For fourth grader Victoria Bolen, the Adopt-A-Soldier program is especially important. Her uncle, whom she called Captain James, is in the military.

“It’s just really important to me that we get this stuff to our soldiers,” she said. It really is. It is really great to have someone in the family that fights for your country.”

The collection is accepting anything from black socks, batteries, and pens and paper to snacks, candy, playing cards and toiletries.

“But I bet the soldiers will be really surprised with all the stuff we’re sending them,” Victoria said. “I say this should be important to everybody. Besides, the best thing ever, whenever someone is fighting for you, is when they come home.”